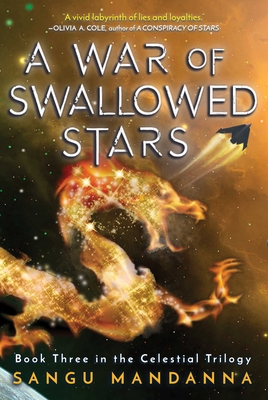 “A rare gem of a sequel . . . Each page drips with action and moral complexities.” —Natasha Ngan, New York Times bestselling author of Girls of Paper and Fire, on A House of Rage & Sorrow

A prince without his kingdom.

A kingdom without its princess.

The destruction of the stars themselves.

War is destroying the galaxy. Esmae has vanished without a trace. A terrifying, ravenous beast is devouring the stars one by one. Titania is offered a gift that may well be a curse. Alexi, the exiled prince, is asked to pay a heavy price for his mistakes. And far, far away, on a dark, mysterious planet, a sleeping god stirs awake.

As the end of the world draws ever closer, Esmae and Alexi must decide how far they’ll go to win—and who they’ll sacrifice along the way.

Celebrated author Sangu Mandanna promises a gripping conclusion to the Celestial Trilogy in A War of Swallowed Stars.

Praise For A War of Swallowed Stars (Celestial Trilogy #3)…

"Seventeen-year-old warrior Esmae Rey is tired of fighting. She and her twin brother, Alexi, have been battling for the crown of the planet Kali, a kingdom that should be Esmae’s birthright. Esmae remains devastated that her mother, Kyra, not only sides with Alexi, but has been bent on killing Esmae to protect Alexi and their younger brother, Bear, from a curse prophesying that only two of Kyra’s three children would live. But when, after escaping another one of her mother’s deadly traps, Esmae is asked to kill Sorsha, a great beast who is endangering the universe, she wonders if her mission for revenge against her treacherous family is worth a potentially world-ending war. But even if she has a change of heart, can Esmae broker peace before she and everyone she loves lose what they truly value? This final volume in a gripping trilogy about the battle to claim Kali is, in some ways, lighter and more humorous than its predecessors, resting as it does on the firm foundations of relationships the author has skillfully built over the course of many pages. While the plot is action packed and the dialogue is witty and, at times, hilarious, the book’s biggest strength lies in the author’s profound knowledge of human nature and the slow, rewarding revelation of each character’s psychological development. A thrilling space opera and a fitting ending to an impressive trilogy. (list of characters) (Science fiction. 14-18)" —Kirkus Reviews

Praise for A House of Rage & Sorrow

Sangu Mandanna was four years old when an elephant chased her down a forest road and she decided to write her first story about it. Seventeen years and many, many manuscripts later, she signed her first book deal. She is the author of The Lost Girl, A Spark of White Fire and its sequels, and has contributed to several anthologies. She lives in Norwich, in the east of England, with her husband and kids.
Loading...
or support indie stores by buying on