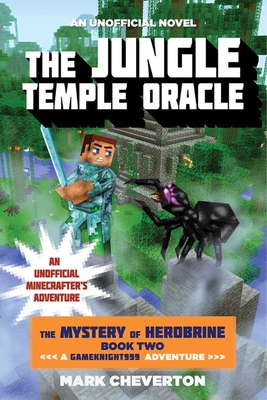 The Mystery of Herobrine: Book Two: A Gameknight999 Adventure: An Unofficial Minecrafter's Adventure

An ancient jungle temple holds the secrets to stopping the evil Herobrine!

Gameknight999’s true enemy has finally surfaced: Herobrine, an artificially intelligent virus that wants to escape Minecraft and destroy mankind with their own creation—the Internet. If he is able to escape the game and get online, Herobrine will infect millions of computer systems and turn machines and weapons on their masters, threatening all of humanity.

After facing Herobrine in battle and nearly dying, Gameknight realizes he’s going to need much more help to defeat this seemingly invincible enemy. His NPC friends tell him of the ancient Oracle residing in the oldest jungle temple in Minecraft who knows the secret to defeating this terrible threat. The path to the temple is fraught with danger, with zombies, spiders, and creepers lying in wait behind every tree and bush. Gameknight will enlist the help of his friends on his quest, but will they reach the Oracle in time to stop Herobrine? Gameknight999 will be tested to his limits, and perhaps beyond, in this spine-tingling new adventure.

Sky Pony Press, with our Good Books, Racehorse and Arcade imprints, is proud to publish a broad range of books for young readers—picture books for small children, chapter books, books for middle grade readers, and novels for young adults. Our list includes bestsellers for children who love stories told with LEGO bricks, books that teach lessons about tolerance, patience, and the environment, and much more. We also publish books for fans of Minecraft and Pokemon GO, including books full of useful hacks, tips, and tricks, as well as Minecraft adventure stories for readers who love the fight of good vs. evil, and magical academies similar to Hogwarts in the Harry Potter saga. While not every title we publish becomes a New York Times bestseller or a national bestseller, we are committed to books on subjects that are sometimes overlooked and to authors whose work might not otherwise find a home.

Mark Cheverton grew up in Southern California. A former high school physics and math teacher, he earned a master’s degree in physics and conducted research on planetary atmospherics. After moving to the East Coast, he started doing research for a Fortune 100 company in the fields of machine vision and additive manufacturing. The first book in his Gameknight999 Series, which is set in the world of Minecraft, was published in 2013.
Loading...
or
Not Currently Available for Direct Purchase