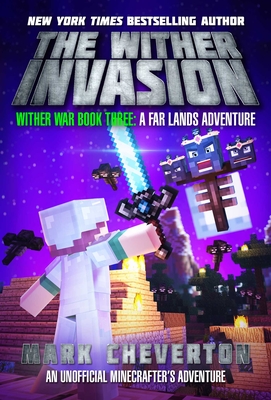 New York Times bestselling author, Mark Cheverton, takes Minecraft fans into a battle to save Minecraft itself from destruction.

With Krael, the king of the withers, trapped in another world, the young wizard Watcher thinks the Great War is finally over. . . . but he’s wrong. Intent on destroying all villagers, Krael has found a way to bring his army to the Far Lands.

Now, with Krael’s vicious horde chasing them, Watcher and his friends must save as many villages as possible before making their final stand. But, outnumbered by monsters stronger than they’ve ever seen, it seems hopeless.

It will be left to Watcher to save them, and, with a secret weapon of mass destruction, the young wizard will be forced to make a decision: Should he destroy millions of monsters, or should the villagers stand and fight, knowing they’ll die?

What Watcher doesn’t know is that a secret built into the ancient weapon could change the course of the war . . . for better or for worse.

Mark Cheverton is a former high school physics and math teacher and the father of a Minecraft fanatic. He is the creator of the New York Times bestselling Gameknight999 series, action-adventure books set in the world of Minecraft conceived as a way to teach children the dangers of online bullying.
Loading...
or support indie stores by buying on