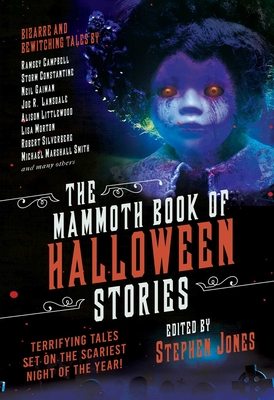 The Mammoth Book of Halloween Stories

Terrifying Tales Set on the Scariest Night of the Year!

Treat yourself to some very tricky stories! Halloween . . . All Hallows’ Eve . . . Samhain . . . Día de los Muertos . . . the Day the Dead Come Back . . . When the barriers between the worlds are at their weakest—when ghosts, goblins, and grisly things can cross over into our dimension—then for a single night each year the natural becomes the supernatural, the normal becomes the paranormal, and nobody is safe from their most intimate and terrifying fears.

The Mammoth Book of Halloween Stories brings you a dark feast of frightening fiction by some of the most successful and respected horror writers working today:

Here you will encounter witches, ghosts, monsters, psychos, demonic nuns, and even Death himself in this spooky selection of stories set on the night when evil walks the earth . . .

Praise For The Mammoth Book of Halloween Stories: Terrifying Tales Set on the Scariest Night of the Year!…

"[The] latest epic anthology . . . edited by the indefatigable Stephen Jones . . . one of the world’s most respected and hardest working anthologists. . . . It contains enough spooky tales and timeless treats to be readable at the misty, murky tail-end of any year. . . . A wide range of voices and perspectives are on offer in this one, which . . . enables Steve Jones to tackle the many different aspects of this complex, multi-layered festival, and the varied customs wrapped up in it. . . . These are chilling tales all, showing scare-meister authors at the top of their game. . . . Buy it and read it. It’s not the first Halloween anthology, and it certainly won’t be the last, but I suspect it’ll never have many rivals that can boast such a broad range of story types and Halloween subject-matter." —Paul Finch, author of Shadows, Stolen, and Kiss of Death

Stephen Jones is one of Britain’s most acclaimed horror and dark fantasy writers and editors. He is a Hugo Award nominee and the winner of four World Fantasy Awards, three International Horror Guild Awards, five Bram Stoker Awards, twenty-one British Fantasy Awards and a Lifetime Achievement Award from the Horror Writers Association. He has more than 160 books to his credit, including The Lovecraft Squad and Zombie Apocalypse! series, and twenty-eight volumes of Best New Horror anthologies. Visit his web site at www.stephenjoneseditor.com or follow him on Facebook at stephenjones-editor. He lives in London, England.
Loading...
or support indie stores by buying on
(This book is on backorder)