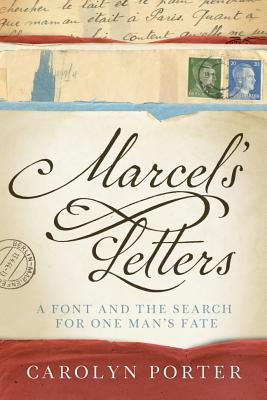 A Font and the Search for One Man's Fate

Seeking inspiration for a new font design in an antique store in small-town Stillwater, Minnesota, graphic designer Carolyn Porter stumbled across a bundle of letters and was immediately drawn to their beautifully expressive pen-and-ink handwriting. She could not read the letters—they were in French—but she noticed all of them had been signed by a man named Marcel and mailed from Berlin to his family in France during the middle of World War II. As Carolyn grappled with designing the font, she decided to have one of Marcel’s letters translated.

Reading words of love combined with testimony of survival inside a labor camp transformed Carolyn's curiosity into an obsession to find out whether he ever returned to his beloved wife and daughters after the war.

Marcel's Letters is the incredible story of Carolyn's increasingly desperate search to uncover the mystery of one man’s fate during WWII, seeking answers across Germany, France, and the United States. Simultaneously, she continues to work on what would become the acclaimed P22 Marcel font, immortalizing the man and his letters that waited almost seventy years to be reunited with his family.

Praise For Marcel's Letters: A Font and the Search for One Man's Fate…

“Marcel’s Letters deftly portrays how a curiosity can grow into a search, and the search into an obsession. Having developed a profound sense of responsibility for one man’s lost history, Carolyn Porter follows the clues scattered in his letters to his family. Her story bursts with the excitement of discovery and culminates with the indescribable honor of returning fragments of a forgotten history to the people they were meant for.” —Glenn Kurtz, author of Three Minutes in Poland: Discovering a Lost World in a 1938 Family Film

"Carolyn Porter takes us on her offbeat quest to solve a transatlantic history mystery and unearths an intriguing pocket of our past along the way." —Megan Smolenyak, author of Who Do You Think You Are? The Essential Guide to Tracing Your Family History

"Quirky, heartfelt, and compulsively readable. Marcel's Letters is an inventive combination of memoir and amateur historical sleuthing. An unforgettable story." —Theresa Kaminski, author of Angels of the Underground

"We pick a font hoping it says something about us: that we are creative, intellectual, or have business know-how. But what happens when a font picks a graphic designer and turns her world upside down and inside out? In Marcel's Letters, Carolyn rescues one man's legacy, and ultimately gifts us with her own." —Elizabeth Rynecki, author of Chasing Portraits

In Marcel's Letters Carolyn Porter has plucked a powerful story from the recesses of history. After purchasing a trove of letters because of their elegant script, Porter embarked on a quest to solve the mystery of their authorship and in so doing embarks on a historical awakening of her own." —Cathryn J. Prince, author of American Daredevil: The Extraordinary Life of Richard Halliburton, the World’s First Celebrity Travel Writer

"Marcel’s Letters is a gripping page-turner about one type designer’s efforts to uncover (and recover) the destiny of a French forced laborer during Word War II." —Yves Peters, type writer and producer for Type Network

"Fascinated by the handwriting, Carolyn Porter’s chance purchase of a few letters led her to a remarkable adventure in font design, research to understand the wartime separation of a father from his wife and children, and a quest to uncover Marcel’s fate in the Second World War and that of his family. Marcel’s Letters tells a compelling story of romance, perseverance, and discovery." —Professor Kenneth Mouré, historian of modern France, University of Alberta

"It's a pleasure to read Porter's romantic dive into the depths of the lost art of letter writing and contained worlds. Porter and Marcel both ask their readers to slow down, look closer, and let passion persist, even if one is alone on a soulful search. The soul, Porter seems to say, isn't seen through the eyes or the hands—no, it's in the handwriting." —Star Tribune (Minneapolis)

"Porter's captivating memoir describes her journey to find answers, noting how her fascination with Marcel proved infectious as she faces obstacle after obstacle and enlists the help of experts to discover the fate that awaited him. . . As impressive as her detective work is, it is Marcel and his letters—real, honest, heartfelt, and brave—that are undoubtedly the star of this marvelous book." —Booklist, starred review

"[A] tribute to the power of curiosity." —Growler magazine

"[An] intriguing memoir from a diligent researcher." —Kirkus Reviews

"An absolutely engaging and inherently fascinating read from first page to last, Marcel's Letters is an extraordinary story—one that will linger in the mind and memory long after the book it finished and set back upon the shelf. . . . Unreservedly recommended,"—Midwest Book Review

"It's evident on every page that Porter put her heart and soul into her research, and an equally passionate and tenacious support group aided her in uncovering all of Marcel's secrets. This book is at special read, one that will make you laugh and cry in equal measure."—Writers Bone, 16 Books That Should Be On Your Radar: September 2017

"Regardless of your disciplinary tribe, I recommend reading Marcel's Letters to learn more about designer-driven empathy in action. All design educators, whatever academic department, should add this book to their reading recommendations, even make it required, to provide a well-covered insider account of design as object-making adjacent to design as giving a damn."—DesignFeast.com

Carolyn Porter is a graphic designer, typography geek, and founder of the graphic design company Porterfolio. She designed the font P22 Marcel Script, which garnered five awards, including the prestigious Certificate of Typographic Excellence from the New York Type Director’s Club. She lives in White Bear Lake, Minnesota.
Loading...
or support indie stores by buying on
(This book is on backorder)