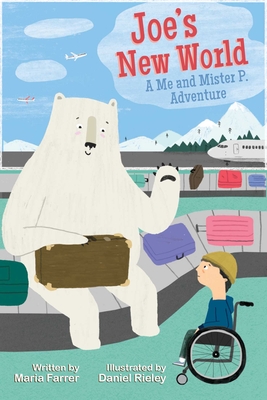 There are times when only a polar bear will do . . .

When Joe’s parents told him the family would be moving, Joe took it in stride. Moving to a new house would be an adventure, nothing to worry about, right?

But then they dropped the bomb: they weren’t simply moving to a different house down the road, or even one in the same town. No, they were moving to a new country!

They urge Joe to make new friends and try to fit in, not seeming to understand that Joe doesn’t want new friends—he just wants his old friends. His friends back home already love and accept him for who he is (wheelchair, bad jokes, and all!). Who would want to start over?

At the airport, Joe’s suitcase goes missing, and he is sent home with a giant, friendly, funny polar bear instead. Mister P. will be Joe’s new friend, even though Joe isn’t quite sure how the two of them will pull this off. What could a polar bear and a kid have in common?

Praise for Me and Mister P.:

"This had me charmed: a hugely appealing story about a polar bear who unexpectedly comes to stay. A fresh and funny story of family and friendship with black and white illustrations throughout," —The Bookseller

"[N]umerous half- and full-page illustrations are a hilarious accompaniment to a tale that for the most part doesn't take itself too seriously. . . . Useful as bibliotherapy for siblings and classmates of children with autism, this effort also crosses over to readers who enjoy fantastical animal tales." —Kirkus Reviews

Maria Farrer trained as a speech therapist and teacher and has worked in hospitals and schools. She later completed an MA in Writing for Young People. She has had several books published for young readers. She lives in Somerset, United Kingdom.

Daniel Rieley is a British freelance illustrator based in Lisbon, Portugal.
Loading...
or support indie stores by buying on