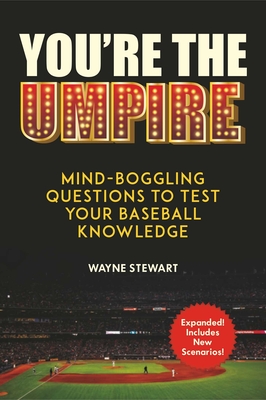 Calling all Yankee and Red Sox fans! Dodgers and Giants fans! Blue Jays, White Sox, and Cubs fans! Fans everywhere! Do you have what it takes to be Major League umpire? Well, now you can test your baseball knowledge.

Divided into three sections, this unusual handbook, now in its third edition, offers Routine Calls, which deal with scenarios and rules that typically come up in games and deal with clear-cut rules—fair and foul, strike zone questions, and the like.

The next section, Basic Situations, deals with umpiring matters and rules that are just a bit more unusual or, for the casual fan, obscure. Interference and obstruction calls, for example, don’t come up too often, but they remain standard stuff involving rules that umps and many fans know quite well.

In the final section, Obscure Rules and Situations, you will be presented with what many baseball people call “knotty” problems. Here, you will be asked questions involving the complex infield fly rule and other arcane matters. This section, then, is the ultimate test of your umpiring skills and knowledge.

Most of the situations in You’re the Umpire come from real games, such as the time a fastball from Randy Johnson killed a bird in flight and what the umps did regarding that pitch, but some scenarios are made up to illustrate specific points or rules. Test yourself against your friends or against the iconic baseball rulebook. It’s a challenge and it’s fun.

Wayne Stewart has been a professional sportswriter for more than thirty-five years and has authored thirty books, including Name that Ballplayer, You’ re the Umpire, and The Little Giant Book of Basketball Facts.
Loading...
or
Not Currently Available for Direct Purchase