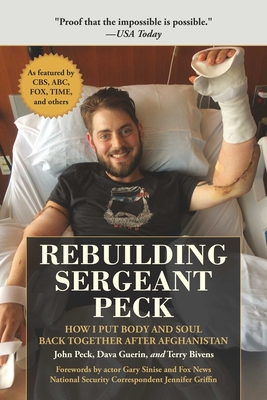 How I Put Body and Soul Back Together After Afghanistan

As seen on Fox & Friends! "Today, it was my honor to welcome John (HERO) to the Oval, with his wonderful wife Jessica. He also wrote a book that I highly recommend, Rebuilding Sergeant Peck."—President Donald J. Trump

What followed was a recovery nothing short of miraculous. With resilience and the help of advocates like actor and philanthropist Gary Sinise, FOX’s Jennifer Griffin, and Bill O’Reilly, John would use a specialized “Action Trackchair” wheelchair and a newly-built SmartHome to get a third lease on life. In 2016, Peck underwent a groundbreaking bilateral arm transplant, receiving two new arms. To date, the surgery has been successful.

Today, Peck is a motivational speaker, a philanthropist for veteran and wounded warrior causes, and is pursuing his lifelong dream of becoming a chef with the help of Chef Robert Irvine. From the lessons learned in a difficult childhood and as a homeless teenager, to dealing with depression in recovery, to learning how to chop with another man’s arms, Rebuilding Sergeant Peck is Peck’s account of an honest, visceral, and inspirational story that is truly unique.

Sgt. John Peck (ret.) served two tours as a Marine during the War on Terror. He became a quadruple amputee after being injured by an IED for the second time, and received a groundbreaking bilateral arm transplant in 2016. John is one of only two military members to have gone through this complex surgical procedure. As a result, he has become an advocate for organ donation and encourages every American to become an organ donor. He continues his philanthropy work and is pursuing his dreams of becoming a chef. In addition, he is becoming a motivational speaker focusing on inspiring corporations, non-profit organizations and others with his message of hope and overcoming obstacles with humor and resolve. He lives with his wife, Jessica, in Bethesda, Maryland.

Terry Bivens is an award-winning journalist and highly ranked Wall Street analyst. After working for Bear Stearns, as a managing director covering the food industry, he moved to J.P. Morgan Chase after they purchased Bear Stearns. He was a regular guest on CNBC as well as other financial and business media outlets. His 1991 series for the Philadelphia Inquirer on the Dorrance family, majority owners of Campbell Soup, was nominated for the Pulitzer Prize, and his work has appeared in the New York Times and several national magazines. He and his wife, Dava Guerin, and their Labradoodles live in Berlin, MD.

Praise For Rebuilding Sergeant Peck: How I Put Body and Soul Back Together After Afghanistan…

"I met Marine Sgt. John Peck, a quadruple amputee who has received a double arm transplant, at Walter Reed in 2017. Today, it was my honor to welcome John (HERO) to the Oval, with his wonderful wife Jessica. He also wrote a book that I highly recommend, Rebuilding Sergeant Peck."—President Donald Trump

“Rebuilding Sergeant Peck is an absolutely riveting, powerful, and inspirational story of a young Marine wounded in combat. Never have I been more moved by the will, strength, or perseverance of a warrior whose actions epitomize the term “combat mindset.” Although it is a great tragedy anytime anyone in the military is wounded or killed defending our country, Sergeant Peck’s story is beyond belief.
He not only suffered from injuries that included a TBI and losing his memory, all of his limbs, and then his marriage, but after a great deal of treatment he did everything in his ability to deploy again!   Sergeant Peck epitomizes the true meaning of never ever giving up despite all odds. This story should be read by all military personnel and anyone who would like to be reminded of just how powerful a person can be when his or her soul is on fire.”—Don D. Mann, Navy SEAL (ret), New Your Times bestselling author of Inside SEAL Team SIX

“What I admire about John Peck is his attitude. We’re pulling for you John Peck.”—Gayle King on CBS This Morning

“I met Sgt. John Peck in the fall of 2010; he has been an inspiration to me ever since. John has rebuilt his body and soul, and his is a compelling story of determination, persistence, and service.... That’s why I believe John’s book will inspire any­one regardless of whether they serve in the military or not.”—Gary Sinise, actor, author of the bestselling Grateful American, and founder of the Gary Sinise Foundation

“Marine Sgt. John Peck is a survivor, but he is also a thriver. His story still makes me smile. I am so grateful that he entered our lives.”—from the foreword by Jennifer Griffin, FOX News National Security correspondent

“The measure of a man is his heart and head. John Peck went through hell to learn—and prove—how true that really is.”—James Carafano, director of the Foreign Policy Studies and Vice President of the Institute for International Studies at The Heritage Foundation.