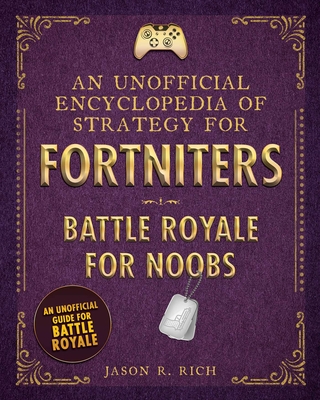 An Unofficial Encyclopedia of Strategy for Fortniters (Hardcover)

An All-Encompassing Introductory Guide to Fortnite!
Get started playing the most popular game out there! An Unofficial Encyclopedia of Strategy for Fortniters: Battle Royale for Noobs will introduce you to all aspects of Fortnite Battle Royale using a comprehensive “A to Z” format that’s extremely easy-to-understand and that includes hundreds of full-color screenshots. Every core element of the game will be explained in detail, while also providing you with tips and strategies that’ll help you achieve success and stay alive longer during matches.

Whether you’re playing Fortnite Battle Royale on a PC, Mac, Playstation 4, Xbox One, Nintendo Switch, Apple iPhone, Apple iPad, or Android-based mobile device, this double-length, full-color, unofficial strategy guide will provide you or “noobs” you know with all of the information you need to get started playing this incredibly popular game.

Learn game-play modes and how they differ, plus discover how to customize and control your soldier throughout each match. Explore the island, combat, building, and survival techniques, and discover the many different types of terrain and challenges you’ll experience in the game.

With this guide, you’ll:

Jason R. Rich (www.JasonRich.com) is an avid gamer and the author of more than two dozen full-length computer and video game strategy guides. He’s also contributed thousands of game reviews and articles to national magazines and websites, and has worked as a consultant to some of the world’s biggest computer and video game developers and publishers. Follow him on Twitter/Instagram (@JasonRich7).

"For a new game mode to be so rapidly developed while differing so much from the game's original vision, and to overshadow the original mode to this degree, is unprecedented."
?PC Gamer
or support indie stores by buying on
Copyright © 2020 American Booksellers Association