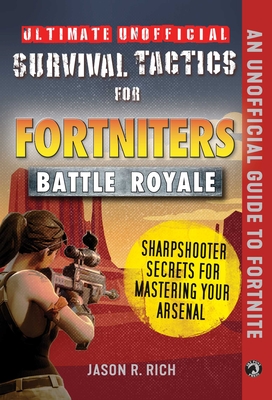 Sharpshooter Secrets for Mastering Your Arsenal

Full color illustrations and expert advice for Fortnite players who want to better use their weapons—and win!

Power up your arsenal with Ultimate Unofficial Survival Tactics for Fortnite Battle Royale: Sharpshooter Secrets for Mastering Your Arsenal! This full-color, comprehensive guide unlocks the weapons and items offered within the game and shows you how to best use them. Inside, you’ll find in-depth strategies and techniques for achieving accurate aim, how to accomplish headshots, and how to make the best use of explosive and projectile weapons.

Whether you’re on a PC, Mac, Playstation 4, Xbox One, Nintendo Switch, Apple iPhone, Apple iPad, or Android-based gaming system, you’ll learn how to utilize more than one hundred different types of weapons in order to achieve #1 Victory Royale. Learn the secrets to each weapon’s ammo type, capabilities, strengths, and weaknesses in order to use it effectively in a firefight. Additionally, you will develop a thorough understanding of the weapons, ammo types, and items available, and you will learn proven strategies for putting together the perfect personal arsenal for each phase of a match—including the End Game.

Jason R. Rich (www.JasonRich.com) is an avid gamer and the author of more than two dozen full-length computer and video game strategy guides. He’s also contributed thousands of game reviews and articles to national magazines and websites, and has worked as a consultant to some of the world’s biggest computer and video game developers and publishers. Follow him on Twitter/Instagram (@JasonRich7).
or support indie stores by buying on