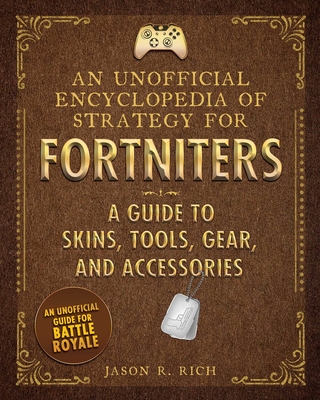 An Unofficial Encyclopedia of Strategy for Fortniters (Hardcover)

A Guide to Skins, Tools, Gear, and Accessories

Hundreds of screenshots with expert instructions, the ultimate guide for Fortnite players on making your character look amazing—and winning!

An Unofficial Encyclopedia of Strategy for Fortniters: A Guide to Skins, Tools, Gear, and Accessories will showcase some of the most popular, rare, limited-edition, and most outrageous outfits thus far released by Epic Games and demonstrate how these outfits can be combined with other optional and purely cosmetic items to truly personalize a character.

As each outfit is showcased and described, along with its related accessory items, full-color screenshots will be used so readers can see what each outfit looks like, plus see a soldier wearing that outfit and using the related items within different in-game scenarios. As these scenarios are shown, readers will discover game-play tips and strategies they can utilize when playing Fortnite Battle Royale on any compatible gaming system.

Jason R. Rich (www.JasonRich.com) is an avid gamer and the author of more than two dozen full-length computer and video game strategy guides. He’s also contributed thousands of game reviews and articles to national magazines and websites, and has worked as a consultant to some of the world’s biggest computer and video game developers and publishers. Follow him on Twitter/Instagram (@JasonRich7).

Praise For An Unofficial Encyclopedia of Strategy for Fortniters: A Guide to Skins, Tools, Gear, and Accessories…

"For a new game mode to be so rapidly developed while differing so much from the game's original vision, and to overshadow the original mode to this degree, is unprecedented."
?PC Gamer
or
Not Currently Available for Direct Purchase
Copyright © 2020 American Booksellers Association