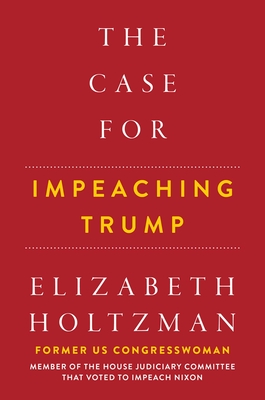 The Case For Impeaching Trump

"Elizabeth Holtzman has always been the first and the bravest, the smartest and most trusted. She is the expert we need to deal with an accidental President who got there as a serial sexual harasser, a candidate who lost the popular vote, and an unsuccessful businessman who was born on third base and thinks he hit a home run. Now what? Ask Liz!"—Gloria Steinem

In the era of Donald Trump, collusion, detention of immigrants, and fake news, it is important to hear what Elizabeth Holtzman has to say. She has been a principled leader and a persistent voice for equality and accountability since she became the youngest woman ever elected to Congress in 1973, which she remained for forty-two years. But she sees American democratic ideals, and the rule of law in the United States, eroding under President Trump.

And as a member of the House Judiciary Committee that voted to impeach Nixon, and one of the members of the Homeland Security advisory council who resigned in protest of President Donald Trump’s policy of separating families at the border, former Congresswoman Holtzman knows that of which she speaks:

“President Donald Trump threatens our democracy. He lies, attacks our constitution, assaults the press, and obstructs justice. He causes unfathomable damage. The Constitution has a remedy for presidents who commit ‘great and dangerous offenses’: impeachment.

A fair, lawful, bipartisan impeachment inquiry into President Trump means getting to the bottom of things. It means analyzing with a clear head and heart what President Trump has done and what the law requires.

Impeaching a president is a grave undertaking. The compassionate and diverse America I know demands we get ready to do it.”

The Case for Impeaching Trump establishes the requirements for impeachment as set out by the Constitution and proves that President Trump’s actions have already met those requirements. Holtzman makes the definitive, constitutional case that Trump can be impeached—and the process should start now.

Praise For The Case For Impeaching Trump…

"Holtzman offers the Watergate investigation as a model for the kind of open, wide-ranging inquiry that she argues is necessary now. . . . She argues that "the standard for commencing an impeachment inquiry has been more than met" by "a far-reaching and continuous groundswell of assaults on the rule of law." She includes evidence from the foreign and domestic Emoluments Clause lawsuits against the president and, most strikingly, invokes Trump's immigration policy, undertaken "without lawful authority," that led to the separation of thousands of children from their parents. . . . Holtzman's books is a reminder that in considering what to do about President Trump, Congress need not—in fact should not—limit itself to the evidence compiled by Mueller."—New York Review of Books

"Holtzman is courageous in writing this book. It certainly won't win her a White House invitation to the Christmas Party. Given the new Congress and a new year coming, this is a timely read."—Tara Sonenshine, New York Journal of Books

“A forceful advocate…[Holtzman had] a significant impact on federal policies.”—USA Today

“Considered one of the brightest stars in New York City politics, earning a reputation for intelligence and honesty.”—Washington Post

“No one I know is more vigilant in holding those in power accountable for upholding our Constitution and the justice it demands.”—Former Congresswoman Patricia Schroeder

“A Watergate hero.”— The New Republic

“A woman of integrity who lives by her principles.”—Publisher’s Weekly

“A progressive patriot dedicated to the rule of law.”—Mark Green, coauthor of The Book on Bush

Elizabeth Holtzman is a lawyer and political leader who was Democratic Congresswoman from New York. She served on the House Judiciary Committee charged with investigating the Watergate scandal and prepared articles of impeachment that precipitated the resignation of President Nixon. Congreswoman Holtzman later became District Attorney of Brooklyn, New York, where she prosecuted major crimes, including those political and organized. She is a graduate of Harvard Law School and and currently practices law in New York. Congresswoman Holtzman is a frequent speaker on political affairs on CNN, MSNBC and other major news networks, a well published author in the New York Times and other media outlets, and is the co-author with Cynthia L. Cooper of The Impeachment of George W. Bush, Who Said it Would be Easy, and Cheating Justice.
Loading...
or
Not Currently Available for Direct Purchase