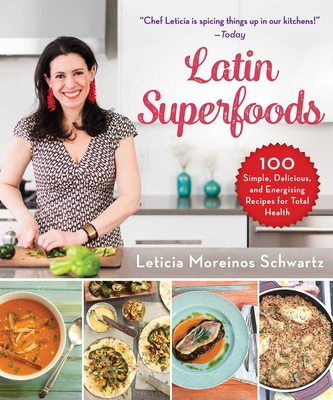 Most people associate healthy cooking with boring taste and flavorless foods, but Leticia is on a mission to prove that healthy eating not only can be absolutely delicious, but also that food is medicine, and that by living a healthy lifestyle you can take control of your health and of your life.

Through the American Diabetes Campaign, Leticia sees first-hand the dietary problems that contribute to this and many other lifestyle diseases, particularly in the Hispanic community here in the US and in Latin countries globally. She quickly realized that once Latinos move to the US, their habits change for the worse, along with their health. “We no longer shop at a farmers market or cook homemade meals. Instead, we shop at big chain stores and buy pre-packed foods. The road from a healthy Latin culture to the North American table became a tough one somewhere along the way.”

Utilizing healthful, nutritious ingredients like nuts, grains, seeds, herbs, spices, beans, fruits, and vegetables, these tried and true favorites include classics like arroz con pollo and quesadillas (with a healthy twist), to lesser-known (but still traditional) dishes like grilled shrimp with Caipirinha vinaigrette and wild rice salad with mango and shrimp.

The good news is that maintaining a healthy diet has never been easier, precisely because of the influence of the Latin culture in this country. Award-winning author Leticia Schwartz will introduce you to new and improved Latin recipes to enjoy without compromising on flavor!

"Leticia’s passion for cooking combined with her knowledge of health provides insight on how to better cook for yourself. Of course, the Latin influence throughout the recipes gives real soul and taste."
—Daniel Boulud, chef & restaurateur

"In Latin Superfoods, Leticia provides us fun, lighter takes on Latin classics and a raft of fresh new recipes sporting Latin ingredients, all of them destined to brighten up my daily menus. Yucca Latkes, Hearts of Palm Ceviche, and Chicken Ropa Vieja are at the top of my try-‘em-now list, but I’m intrigued by nearly everything in the book."
—Sara Moulton, chef, cookbook author & television personality

"Chef Leticia Schwartz is spicing things up in our kitchens!"
—The Today Show

“Chef Leticia’s passion for empowering people to learn about healthy eating shines in this book. Through her recipes and work on America’s Diabetes Challenge, she continues to remind us that you don’t need to sacrifice flavor when eating healthy—it can still be delicious.”
—Conrod Kelly, Merck

“Latin Superfoods clearly illustrates how to prepare and enjoy more healthy versions of foods such as avocados, peppers, beans, and other foods used in the preparation of Latin American cuisine . . . Chef Leticia knows her stuff when it comes to cooking.”
—Houston Style Magazine

“In this recipe collection, Schwartz shares highlights from her years of blending Jewish food sensibilities with the splendor of Latin American cuisine: Gravlax Marinated in Tequila; Orange Salad With Sunflower Seeds and Queso Blanco; Watermelon Carpaccio With Feta, Olives, Cilantro and Arugula. In a nod to the interconnectedness of the Jewish world—not to mention the rising popularity of modern Israeli cooking around the globe—many of these dishes could just as readily be ordered beachside in Tel Aviv as they could be in Rio.”
—HadassahMagazine

“In her new book The Brazilian Kitchen, she has transformed the classic, tooth-aching [brigadeiros] recipe with unsweetened coconut, pistachio paste, and real chocolate sprinkles.”
—The New York Times

Leticia Moreinos Schwartz is a Brazilian-American chef who studied culinary and pastry arts at the French Culinary Institute, and who has worked at legendary New York restaurants such as Le Cirque 2000, La Grenouille, and La Caravelle. She is also the author of The Brazilian Kitchen which won Best Latin Cookbook at the World Gourmand Awards, and My Rio de Janeiro. Leticia has appeared on The Today Show, CBS Early Show, Fox Morning Show, ABC News, and local television. She was an NBC correspondent for the 2016 Summer Olympics in Rio.
Loading...
or support indie stores by buying on