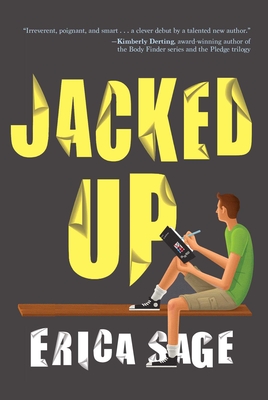 Saved! meets Tim Federle with just a dash of A.S. King in this hilarious and poignant debut about a teen stuck at Jesus camp.

It’s bad enough that Nick’s sister is dead, and, in some bizarre attempt to force him to confront his grief, his parents are shipping him off to Jesus camp. But he’s also being followed around by Jack Kerouac, who’s incredibly annoying for a genius.

If arguing with a dead beat poet doesn’t qualify him for antipsychotics already, Nick’s pretty sure Eden Springs is going to drive him insane. The campers ride donkeys into the desert, snap selfies with counselors dressed as disciples, and replace song lyrics with Bible verses. And somehow, only Nick seems to find this strange.

Worst of all is the PC Box, into which the campers gleefully place daily prayers and confessions. With Jack nagging him to do it, Nick scribbles down his darkest secret—about his sister’s death—and drops it in the box.

But then the box is stolen, with Nick’s secret inside of it. And when campers’ confessions start appearing around the camp, Nick is desperate to get the box back—before the world learns the truth about what he did. The truth he can’t even face himself.

Laugh-out-loud funny, surreal, and insightful, this is an unforgettable novel about the strangeness of life, death, and grief—and the even stranger things people do to cope.

Praise For Jacked Up…

“Irreverent, poignant, and smart, Jacked Up turns Jesus camp on its head! A clever debut by a talented new author.” —Kimberly Derting, award-winning author of the Body Finder series and the Pledge trilogy

“With an unforgettable setting and a vibrant cast of characters, Erica Sage has delivered a poignant story of one boy’s search for forgiveness in the face of loss. Hilarious and insightful, Jacked Up explores the complexities of both faith and grief with remarkable honesty, nuance, and grace. A captivating debut.” —Katie Henry, author of Heretics Anonymous

“You can’t help but think of Jack Kerouac’s famous novel during this humorous and heartbreaking road trip of a book. Erica Sage’s deft hand on the wheel makes the journey memorable.” —Mark Teppo, author of the Codex of Souls duology

“Spiritual without being didactic, laugh-out-loud funny without being slapstick, and heartwarming without being melodramatic, Jacked Up takes us on a pilgrimage—both literal and allegorical—as Nick searches for healing and redemption.” —Patrick Swenson, author of The Ultra Thin Man

"An impressive debut novel that entertains while encouraging the questioning of all assumptions." —Kirkus Reviews

“This story of tragedy and relationships reads quickly, and Nick is a sympathetic narrator. . . . The author has created a small but well-crafted cast of characters [with] real-life issues that will resonate with young adults. A good selection for most YA collections.” —School Library Journal

Erica Sage is an English teacher and writer who lives in Washington state with her two sons. When not reading and writing, she loves to hike around Mount Rainier and travel whenever and wherever—whether it’s packing up and heading to a new country, or just climbing into the car for a road trip. Jacked Up is her debut novel.
Loading...
or support indie stores by buying on