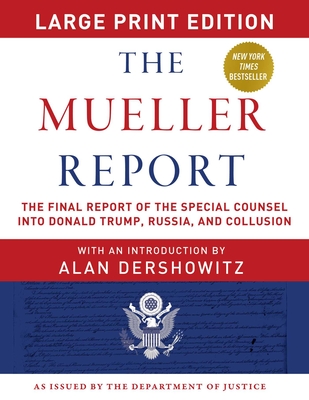 The Final Report of the Special Counsel into Donald Trump, Russia, and Collusion

There has never been a more important political investigation than Robert S. Mueller III's into President Donald Trump's possible collusion with Russia. His momentous findings can be found here, complete with:

The wait is over. Robert Mueller, a lifelong Republican, has concluded his investigation and submitted its findings to Attorney General William Barr. Barr has told Congress that Mueller found no proof of collusion between the Trump campaign and Russia, and did not come to a conclusion on obstruction of justice—neither concluding the president committed a crime nor exonerating him. But Mueller’s report was over 300 pages and Barr’s summary was only four pages, raising questions about the conclusions of a historic investigation.

Special Counsel Robert Mueller III’s probe into Russian influence on the 2016 election of Donald Trump—including links between the campaign and Russian interests, obstruction of justice by President Trump, and any other matters that may have arisen in the course of the investigation—has been the focal point of American politics since its inception in May 2017.

Democrats in the US House of Representatives hoped to use the report to begin impeachment proceedings, with the support of those critical of the president. Media tracked Mueller’s every move, and the investigation was subject to constant speculation by political pundits everywhere. It resulted in the indictments of Michael Flynn, Paul Manafort, Roger Stone, and many others. President Trump and his supporters affirmed that the investigation was a “witch hunt” and the product of a plot by the political establishment—the “deep state”—to delegitimize his presidency.

Mueller’s findings—at least according to Barr—allowed the latter to claim victory. But now, thanks to a subpoena from House Judiciary Committee chairman Jerry Nadler for the full report, a resolution from the House of Representatives to release the full report to the public (though blocked in the Senate by Mitch McConnell), and popular demand, it’s time for public to judge if that is true.

The Mueller investigation will join Watergate, and the Mueller Report will join the 9/11 Commission Report, the Warren Report, and the Starr Report, as one of the most important in history. The Mueller Report is required reading for everyone with interest in American politics, for every 2016 and 2020 voter, and every American. It’s now available here as an affordable large-print paperback, featuring an introduction from eminent civil libertarian, Harvard Law Professor Emeritus, and New York Times bestselling author Alan Dershowitz, who provides a constitutional, civil law-based commentary sorely needed in today’s media landscape.

Praise For The Mueller Report - Large Print Edition: The Final Report of the Special Counsel into Donald Trump, Russia, and Collusion…

“The Mueller report is that rare Washington tell-all that surpasses its pre-publication hype…the best book by far on the workings of the Trump presidency. It was delivered to the attorney general but is also written for history. The book reveals the president in all his impulsiveness, insecurity and growing disregard for rules and norms; White House aides alternating between deference to the man and defiance of his ‘crazy s---‘ requests; and a campaign team too inept to realize, or too reckless to care, when they might have been bending the law. And special counsel Robert Mueller has it all under oath, on the record, along with interviews and contemporaneous notes backing it up.” —Carlos Lozada, The Washington Post

“This is a document that, like the Badlands National Park, one has to visit for oneself. If you rely on the velvet fog of Attorney General William Barr’s Cliffs Notes, you will get an ‘F’ on the exam… So much of what’s in the Mueller report is already known, thanks to what never again should be referred to as ‘fake news,’ that reading it is like consuming a short story collection that’s already been excerpted in every magazine you subscribe to. But its two volumes nonetheless have the power to shock and appall.”  —Dwight Garner, The New York Times

“It's amazing how many journalistic stories derided as ‘fake news’ over the past few years now re-appear in Mueller's recounting — only this time as documented evidence…. Mueller's contribution to the literature of this period in history will have an expanding readership in the immediate future as well.” —NPR

"Let it come out, let people see it. Let's see whether or not it's legit…I look forward to seeing the [Mueller] report."—President Donald Trump

“This case is too important to keep from the American people.”—Rep. Adam Schiff, (D-CA), Chairman of the House Intelligence Committee

“The Mueller probe is the most important investigation in a generation.”—New York Post

“The special counsel’s inquiry may be Americans’ best chance to understand an attack on their democracy.”—New Republic

“This is a critical moment in American history… the most momentous political probe since Watergate.”—The Guardian

“[The Mueller investigation] is the only drama that matters.”—BBC

“[Mueller] has sterling credentials and is above reproach.”—Sen. Susan Collins (R-ME), a member of the Senate Intelligence Committee

"Bob was a fine U.S. attorney, a great FBI director and there’s no better person who could be asked to perform this function. He is respected, he is talented, and he has the knowledge and ability to do the right thing."—Sen. Dianne Feinstein (D-CA)

“[Robert Mueller III is] someone with a history of expertise and experience with the guts and backbone to stand up and speak out against any kind of political influence.”—Sen. Richard Blumenthal (D-CT)

Alan Dershowitz is one of the most famous and celebrated lawyers in America. He was the youngest full professor in Harvard Law School history, where he is now the Felix Frankfurter Professor of Law, Emeritus. Dershowitz is the author of numerous bestselling books, including the New York Times bestseller The Case Against Impeaching Trump.

Robert S. Mueller III is the special counsel of the investigation into Russian interference in the 2016 election and any other matters that arise from his findings. He served as director of the FBI from 2001 to 2013. Mueller, a registered Republican, had dedicated his life to public service and has assembled a decorated criminal justice career. He also served as a Marine in the Vietnam War, and received a Purple Heart and Bronze Star for heroism.

The U.S. Department of Justice has a mission to enforce the law and defend the interests of the United States according to the law; to ensure public safety against threats foreign and domestic; to provide federal leadership in preventing and controlling crime; to seek just punishment for those guilty of unlawful behavior; and to ensure fair and impartial administration of justice for all Americans.
Loading...
or support indie stores by buying on
(This book is on backorder)