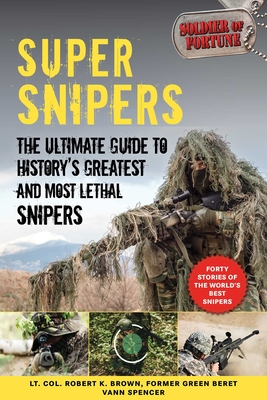 The Ultimate Guide to History's Greatest and Most Lethal Snipers

In Super Snipers, the editors of Soldier of Fortune show readers the ways of the expert sniper in forty stories from those who have mastered the craft.

Becoming an elite sniper involves more than learning how to shoot. Snipers need to know how to judge terrain, wind, and sometimes even the curve of the Earth. They train their eyes to spot enemy movement in the distance and to never hesitate. A sniper is more that a finger behind a trigger; he is a scout, a scientist, a strategist, and the support group for a platoon.

Super Snipers brings you into the world of some of the most accomplished snipers. From Finland to Iraq, Korea to Somalia, Soldier of Fortune magazine provides forty stories directly from the eyes and minds of the snipers who made the kills. These trained marksmen describe their method of calculating, aiming, and taking the perfect shot, all the way down to the type of chewing tobacco they prefer.
Some of the super snipers in this collection include:
Every sniper—just like every situation that calls for a sniper—is unique, and Super Snipers will show you every step of the way, as you find the target, narrow the scope, and take the shot.

Soldier of Fortune is a monthly magazine acknowledged as the number one military periodical among troops and law enforcement personnel. They have been supporting active troops and veterans for the last thirty-eight years, and in doing so have published a multitude of articles on sniping worldwide, with these being from the best of Soldier of Fortune. Their “participatory journalism” has been praised by readers, as they have trained and fought with freedom fighters and then written about such events. Their headquarters are in Boulder, Colorado.
Loading...
or
Not Currently Available for Direct Purchase