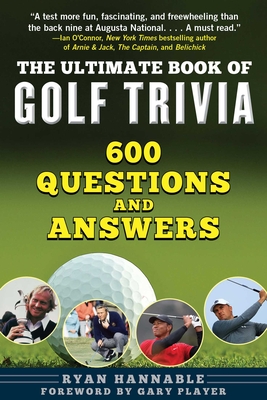 The Ultimate Book of Golf Trivia

Become a golf trivia expert with these challenging questions about Jack Nicklaus, the Masters, Tiger Woods, and more!

The Ultimate Book of Golf Trivia tests and expands your knowledge of golf—covering the sport from the 1970s (and earlier) up to the present day. In this collection of six hundred questions, seasoned sports writer Ryan Hannable tests your level of expertise on all things golf. Some of the many questions that Hannable poses include:
Superstars of the past and present are represented, from Walter Hagen to Tiger Woods, Arnold Palmer to Jason Day, Gary Player to Brooks Koepka, Ben Hogan to Phil Mickelson and everyone in between. The book also includes a special section on the rules of the game.

The Ultimate Book of Golf Trivia is the definitive test for knowledgeable golf fans!

Ryan Hannable is a sportswriter for WEEI in Boston with a personal passion for golf. He has covered multiple PGA Tour events over the years, and his work has appeared in outlets like ESPNBoston.com. Hannable resides in Boston, Massachusetts.

Gary Player has won 168 professional golf tournaments and is the only player to complete the career Grand Slam on both the PGA Tour and Senior Tour. The Player Foundation has raised over $64 million for underprivileged children. Winner of numerous lifetime achievement awards, Player is currently the Global Ambassador to the World Golf Hall of Fame.

Rob Oppenheim was born in Salem, Massachusetts and attended Rollins College. After winning the 2002 Massachusetts Amateur, Rob became a professional, participating in numerous tours before joining the Web.com tour in 2010 and earning his first PGA Tour card in 2016. He is back on the PGA Tour for the 2019–2020 season.
Loading...
or
Not Currently Available for Direct Purchase