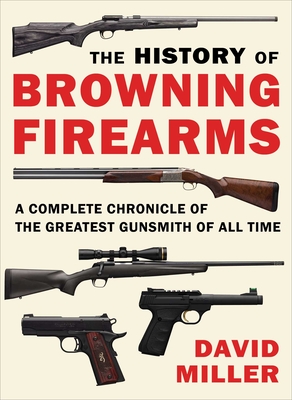 The History of Browning Firearms

A Complete Chronicle of the Greatest Gunsmith of All Time

A captivating and wonderfully illustrated chronicle of one of the most influential and legendary names in gunsmithing history.

John M. Browning was born in Ogden, Utah, in 1855, into a world of gunsmithing. His father was a gunsmith who was already well known for a number of innovations in the field. As a young boy, John spent hours in his father's shop and allegedly knew the name of every part of a gun before he could read. It's hardly surprising that at age twenty-three, he was filing his first patent for the "J. M. Browning Single-Shot Rifle."

Browning inherited his father’s gun making shop, and with funds of less than a thousand dollars, developed it into a highly successful business that developed several iconic firearms including the Colt Peacemaker. Browning also cooperated with Winchester to develop a whole range of small arms including semi-automatic pistols, single-shot rifles, repeater rifles, and machine guns. His enthusiasm and creativity have led many to believe he is the greatest firearm designer of all time.

This fascinating book describes the Browning history, and in addition to covering the full range of inventions and designs, also shows various gun-making artifacts, copies of designers' drawings, and interesting photographs of the weapons in the hands of users.

The History of Browning Firearms makes a perfect addition to the libraries of Wild West buffs and firearms enthusiasts.

David Miller is a former senior officer in the British armed forces, who served in the Falklands, Germany, Malaysia, the Netherlands, and Singapore. Miller has subsequently worked as a freelance author and journalist for Jane’s Information Group. He has also worked for the authoritative International Defense Review and was the editor of Jane’s Major Warships. He has also written more than fifty other books relating to guns and warfare, including The Illustrated Directory of Guns.
Loading...
or support indie stores by buying on