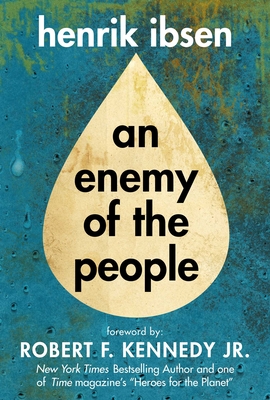 Enemy of the People

Regarded as one of the foremost playwrights of the nineteenth century, Henrik Ibsen tells the story of the idealist Doctor Thomas Stockmann, the medical officer of a recently opened spa in a small town in southern Norway, who finds that the water is seriously contaminated. He notifies members of the community and initially receives support and thanks for the discovery. Threatened by the possible impact of such a revelation, his brother, the town mayor, conspires with local politicians and the newspaper to suppress the story and pressure Dr. Stockmann to retract his statements.

At a public meeting, an attempt is made to keep Dr. Stockmann from speaking, but he launches into a tirade condemning the corruption of the town and the tyranny of the majority. Finding his speech offensive, he is shouted down by the masses and reviled as "an enemy of the people."

In his foreword, Kennedy alerts readers to the undeniable fact that the persecution of those who tell uncomfortable truths, which Ibsen described over one hundred years ago, continues to this day and is as relevant now as ever. We face environmental deregulation and degradation, politicians in lobbyists’ pockets, attacks on facts that are agreed upon by reputable scientists, corporate funded and controlled research, and attempts to impede and suppress whistleblowers. The battle continues and Kennedy joins Ibsen on the front lines.

Norwegian playwright and theatre director Henrik Johan Ibsen, March 20, 1828 – May 23, 1906, is considered one of the most influential and insightful playwrights and poets of the nineteenth century, also referred to as “the father of realism” and “the father of modern drama.”  His plays, including Love’s Comedy, Brand, Peer Gynt, Emperor and Galilean, The Pillars of Society, A Doll's House, Ghosts, An Enemy of the People, The Wild Duck, Hedda Gabler, The Master Builder, and When We Dead Awaken explored and challenged social norms and taboos, stirring up controversy and debate, and bringing to the stage powerful and notorious characters, such as Hedda, the daughter of an aristocratic and enigmatic general, and considered to be one of the most demanding roles taken on by prominent actresses worldwide.

Ibsen was nominated for the Nobel Prize in Literature in 1902, 1903, and 1904, and his plays continue to be performed around the world to this day.

Robert F. Kennedy, Jr. is founder of Waterkeeper Alliance and founder, chairman of the board, and chief legal counsel for Children’s Health Defense. He is also counsel to Morgan & Morgan, a nationwide personal injury practice. Kennedy is an esteemed author, with a long list of published books including the New York Times bestseller, Crimes Against Nature and of Thimerosal: Let the Science Speak. Mr. Kennedy was named one of Time magazine’s “Heroes for the Planet” for his success helping Riverkeeper lead the fight to restore the Hudson River. His reputation as a resolute defender of the environment and children’s health stems from a litany of successful legal actions. He received recognition for his role in the landmark victory against Monsanto, as well as in the DuPont Case that inspired the movie Dark Waters (2019).
Loading...
or support indie stores by buying on