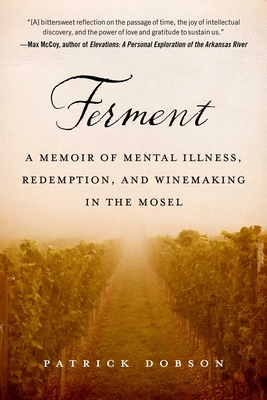 A Memoir of Mental Illness, Redemption, and Winemaking in the Mosel

A deeply moving account of one man’s return to the German town where he first pursued a career in winemaking, and his attempt to reckon with the mental illness, alcoholism, and enduring relationships that defined the most formative chapter of his life.

After an attempted suicide by hanging—with his son in the next room—author Patrick Dobson checks into a mental hospital, clueless, reeling from bone-crushing depression and tortuous, racing thoughts. A long overdue diagnosis of manic depression offers relief but brings his confused and eventful past into question.

To make sense of his suicide attempt and deal with his past, he returns to Germany where, three decades earlier, he arrived as twenty-two-year-old—lost, drunk, and in the throes of untreated mental illness—in search of a new life and with dreams of becoming a winemaker. The sublime Mosel vineyards and the ancient city of Trier changed his life forever.

Ferment charts his days in Trier’s vineyards and cellars, and the enduring friendships that would define his life. A winemaker and his wife become like parents to him. In their son, he finds a brother, whose death years later sends Dobson into a suicidal tailspin. His friends, once apprentices like himself, become leaders in their fields: an art historian and church-restoration expert, an art- and architectural-glass craftsman, a painter and photographer, and a theologian/journalist. The relationships he builds with them become hallmarks of a life well-lived.

Praise For Ferment: A Memoir of Mental Illness, Redemption, and Winemaking in the Mosel…

"Patrick Dobson is one of my favorite writers—his writing reminds me of my own travels and experiences—and Ferment is on its way to being one of my favorite books. It plumbs the depths and explores the heights of experience in a deeply personal way. It will leave you wanting to explore more deeply your own memories."—Eddy Harris, author of Mississippi Solo and Native Stranger

"Patrick’s first trip to Germany—as a young man, depressed and alcoholic—is reconstructed here with full attention given to the emotions he experienced. Back in Germany in 2014 with his wife and son, Patrick renewed friendships and revisited the people and places that set him on the trajectory of eventually achieving emotional and mental stability and creative productivity. The fundamental theme of Ferment is expressed by Patrick thusly: 'Alcoholism and mental illness led me in directions and to take risks I might not have taken if I’d been balanced and moderate.' This hugely important message will give hope to readers who suffer from manic depressive illness and alcoholism or who have loved ones with these afflictions, and it provides tangible evidence of the feasibility of recovery. "—Dr. William Neaves, President Emeritus, Stowers Institute for Biomedical Research

“Unlike many books telling addiction stories, Ferment creates a metaphor that runs through the entire narrative, transforming this non-fiction account into one that reads like good fiction, the reader eager to begin and the storyteller too authentic to let go.”—Bill Bauer, poet and author of The Boy Who Ate Dandelions, Last Lambs, and Promises in the Dust

"As a hopeless drunk and manic depressive, Patrick Dobson didn’t have much chance to make it out of his twenties. But, as he understands more than three decades later, those afflictions led him to an impulsive exile in Germany’s wine country and to this, his third book. Dobson time travels as he revisits and recalls the places and the people who helped shape his life. He’s always walking—through towns and forests and vineyards. Reading his intimate and brutally frank memoir is like going along on a revelatory amble. Ultimately, it’s a story not only of survival but also of the power of family and friendship.—Steve Paul, author of Hemingway at Eighteen

"Ferment is a revelatory walk through the thickets of an alcohol-fueled youth, rampant with self-destructive urges, deceit, despair, and a lifelong journey to redemption. It is immediately apparent this isn’t a typical travelogue, but instead an honest affirmation of the power of resilience, the pull of the past, and the tangible value of human connection across time, distance, and memory. The prelude takes us to a basement where a disillusioned Dobson prepares to take his life until the call of his young son Nick, snaps him to the present. The following chapters detail a family vacation, with wife Virginia and Nick as traveling companions. The family revisit the places Dobson cherished, and the people he grew to love when he was an apprentice sommelier in one of the renowned wine-producing regions of the world, the Mosel Valley. This is a sobering and bittersweet account, brutal in the telling, and true to what we demand from our best writers—honesty to self and story."—Jose Faus, author of The Life and Times of Jose Calderon and This Town Like That

"Ferment is the story of one man’s quest to understand how alcoholism and madness, the sorrow of lost love, and the unexpected grace of good friends forged a life worth living. Patrick Dobson writes with power and wisdom about the crushing depressions and flights of mania that drove him, at the age of twenty-two, to reinvent himself in Germany. Home in Kansas City three decades on—and after a harrowing near-suicide and a belated diagnosis of manic depression—Dobson begins to ponder the course of his life. He sets out to reconnect with the faraway people and places of his youth. The result is a bittersweet reflection on the passage of time, the joy of intellectual discovery, and the power of love and gratitude to sustain us."—Max McCoy, author of Elevations: A Personal Exploration of the Arkansas River

Patrick Dobson is an essayist, poet, historian, author, and ironworker. His first book, Seldom Seen, chronicled a 1,200-mile walk from Kansas City to Helena, Montana and his second, Canoeing the Great Plains, detailed his journey home by canoe down the length of the Missouri River.He lives in Kansas City, Missouri.
Loading...
or support indie stores by buying on