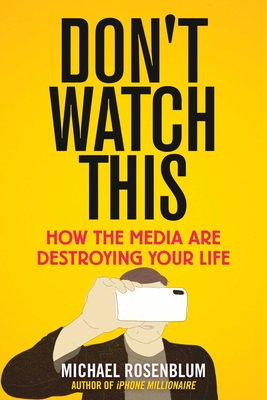 How the Media Are Destroying Your Life

An unfiltered look at the addictive properties of social media, TV, and movies on our culture, with strategies to help you reclaim control over your life.

Today, the average person spends an astonishing eight hours a day watching TV or videos online. Watching social media stories, movies, and TV is now our number one activity, outpacing everything else that we do, including sleep.

This habit has an incredibly powerful influence on our lives – from what we think to what we buy to whom we elect. Media are more than entertainment; they are a drug.

This media addiction wreaks havoc on our mental health, causing increased stress, depression, and anxiety, and ruining personal relationships. It also drives us deeper and deeper into debt.

In Don’t Watch This, former TV producer and Ivy League professor Michael Rosenblum reveals the hidden psychology driving us to media addiction. He describes why solving the problem is not as simple as swearing off our devices, but about learning how to use media for good.

Rosenblum reveals the key to getting the best out of technology, without letting it get the best of you. Inside, you’ll learn:  Enlightening and empowering, Don’t Watch This provides actionable, revolutionary techniques and insight to control your media addiction—helping you live the life you really want.

Praise For Don't Watch This: How the Media Are Destroying Your Life…

Praise for Don't Watch This by Michael Rosenblum:

"A smart and engaging look at how our culture became hypnotized by screens, and what we can do to take back control." –Cal Newport, NYT bestselling author of Digital Minimalism

“If you feel like your media addiction - whether TV, Facebook, Twitter, or whatever – is out of control, read Don't Watch This. Rosenblum is not only one of the smartest people in the country, he's hilarious.” —Mark Bittman, author of How to Cook Anything

"Don’t Watch This is a valuable, comprehensive look at the development and impact of visual media. It is also a provocative condemnation of traditional media, a roadmap to the future for citizen journalists, and a primer on the power of the cell phone. Rosenblum is a hell of a writer and fills each page with erudite allusions and lively anecdotes.” —Martin Fletcher, author of Promised Land and NBC Special Correspondent

"Michael Rosenblum delivers a memoir, a mea culpa, and a manifesto about the drug he expertly produced: television. His warning is not about the technology but about what it delivers: the seduction of the story. And he has a solution." —Jeff Jarvis, author of What Would Google Do?

Winner of the 2013 Small Business Book Award - Technology Category
"You must read this brilliant, practical, hilarious guide to success in the Digital Age—and beyond. An indispensable classic from a classy global guru." —Kevin Klose, Dean, Albert Merrill School of Journalism and Past President, National Public Radio

"Buy this book. Listen to this guy. Make money. Ignore that advice at your peril." —Jeff Jarvis, bestselling author of What Would Google Do? and Director, Tow-Knight Center for Entrepreneurial Journalism at CUNY

"If you buy only one book this year, buy mine. But if you're going to buy a second, buy this one." —Joan Rivers

"Today, if you want to sell your house, sell your car, or get a girlfriend you need a good video. . . . This book gives you what it takes to sell the house, sell the car, get the girl, make some money, and have lots of fun along the way." —Pat Younge, former President and General Manager, The Travel Channel

Michael Rosenblum has spent over 30 years building and designing television stations and networks worldwide based on the concept of the video journalist (VJ), which he originated. He has founded several media companies including TheVJ.com, The Travel Channel Academy, New York Times Television, Current TV, and RosenblumTV.com, among others. He has trained more than 50,000 people to work as independent VJs and has thousands of hours of programming for cable and broadcast. His clients include the Spectrum, Verizon, United Nations, The BBC, the Guardian, the Voice of America, McGraw-Hill, and Condé Nast. He has taught at Columbia University and Oxford University.
Loading...
or support indie stores by buying on