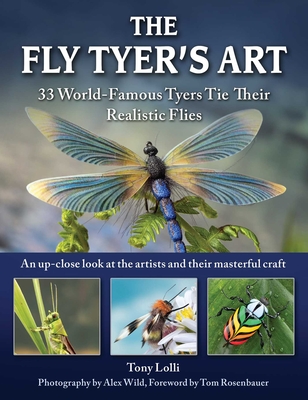 The Fly As An Art Form

The purpose of this book is twofold: to trace the evolution of realistic fly tying and to feature the creations of the world’s most-skilled practitioners of this art form. Some of these contemporary artisans concentrate on imitations of aquatic insects most likely seen by fly fishers. Their focus is on mayflies, caddisflies and stoneflies. For others, the sky is the limit and they tie replicas of anything, including praying mantis, crabs, bees, hornets, ants, spiders, and fish. Theirs is a small, but expanding, cadre of enthusiastic tyers whose work will astonish even those who have never tied a fly. The realism of their fly patterns, whether an art form destined for framed presentation, or a working fly intended for the end of a fly leader, will amaze.

For the past 15 years he has written fly fishing columns for several outdoor magazines including The Northwoods Sporting Journal, On The Water Magazine, New Hampshire/Vermont Outdoor Gazette and The Hunting and Fishing News. His features appeared in American Angler, The Drake, The Pointing Dog Journal, and Gun Dog Magazine.

He’s written seven books on fly fishing and fly tying. The New England Outdoor Writers Association selected Lolli’s Fish and Fishing: Facts and Trivia, as one of the three Best Outdoor Books for 2012. President Jimmy Carter wrote the Foreword for his latest book, The Art of the Fishing Fly.

Photographer Alex Wild is a prolific chronicler of the natural history of insects, especially ants. A lifelong fascination with nature has taken him on a varied career around the world. Alex has taught beekeeping with the Peace Corps in Paraguay, is a co-founder of the international Bugshot insect photography workshops, and has conducted academic research on beetles, wasps, and ants across several continents. He holds a Ph.D. in Entomology from the University of California/Davis and has been Curator of the Insect Collection at The University of Texas at Austin since 2015.
His photographic explorations of insect natural history appear in numerous magazines, textbooks, websites, and museum exhibits including: BBC Wildlife; New York Times; Washington Post; National Geographic; New Scientist; Natural History; Discover; USA Today; NBC; Discovery Channel; Ranger Rick; Smithsonian; Popular Science; Scientific American; Audubon Nature Institute Insectarium; Chicago Field Museum; California Academy of Sciences; American Museum of Natural History; Cleveland Zoo; BASF; Bayer; Science; Nature; Cell; Proceedings of the National Academy of Sciences of the United States of America; Current Biology and many other museums, books, magazines and television programs.
Loading...
or support indie stores by buying on