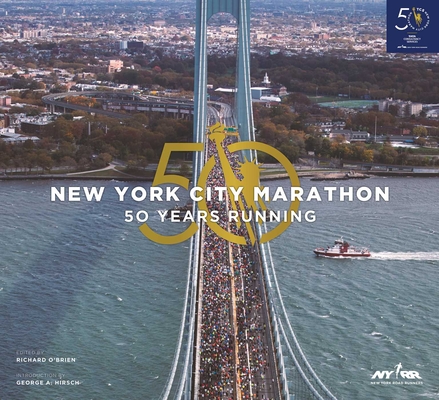 How do you tell the story of a race that symbolizes New York City’s vitality, diversity, and charm? Here, Richard O’Brien offers more than forty definitive articles from over the years that capture the color and excitement of one of the world's most beloved annual events.

In this rich run through the decades, readers will revisit all of the results, relive all of the highlights, and share the road again with all of the marathon’s unforgettable figures, including Fred Lebow, Grete Waitz, Bill Rodgers, Germán Silva, Meb Keflezighi, Mary Keitany, Shalane Flanagan, and so many others. With special sections highlighting the race’s volunteers, spectators, celebrities, and more, as well as an introduction by New York Road Runners Chairman of the Board George Hirsch, the book celebrates the marathon’s first fifty years with a thrilling selection of photographs.

Like the stories of everyday women and men overcoming obstacles to complete the race, these curated images capture the inimitable charge of running the New York City Marathon, while providing a compelling visual tapestry reflecting a half century of cultural change. The images not only show how running gear and hairstyles changed from the early 1970s to the present, but they also reveal the ever-dynamic political and cultural climate of New York City.

This beautifully designed, heavily illustrated coffee-table style book is the perfect gift for any fan of this fifty-year-old race!

Richard O’Brien is a former senior editor at Sports Illustrated, where he covered the Olympics, track and field, and marathoning, among other sports. He has written for Runner’s World and was an editor at The Runner. Currently working as a freelance writer and editor, he lives in Trenton, New Jersey.

George A. Hirsch, chairman of the New York Road Runners, is a founder of the five-borough New York City Marathon. He is the founding publisher of New York magazine, was the long-time worldwide publisher of Runner's World, and lives in New York City.
Loading...
or support indie stores by buying on