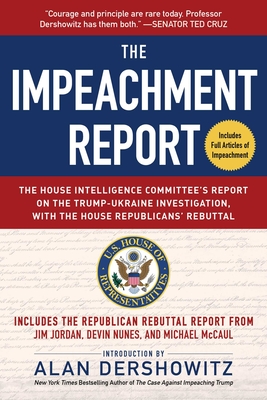 The House Intelligence Committee's Report on the Trump-Ukraine Investigation, with the House Republicans' Rebuttal

With an Introduction by Acclaimed Legal Scholar and New York Times Bestselling author Alan Dershowitz, The Official Impeachment Inquiry Report on The Results of The Trump-Ukraine Investigation—Plus the Articles of Impeachment and the Republican Report Disputing the Results of the Democratic Investigation.

Donald Trump is on the verge of being only the third US President impeached by the House of Representatives, but is this a case of a president abusing his power and obstructing justice, or is it a partisan witch hunt protecting the Deep State? Can you trust the mainstream media, or do you want to read the Report for yourself?

This groundbreaking report—released by the U.S. House Of Representatives Permanent Select Committee on Intelligence, chaired by Adam Schiff—contains the results of the impeachment inquiry into President Donald Trump’s actions as he sought for Ukraine to announce investigations into Hunter Biden, as well as the Committee’s conclusions about whether those actions are impeachable offenses.

Covering topics ranging from the anonymous whistleblower’s first attempts to spread the word about Trump’s phone call with Ukrainian President Volodymyr Zelensky, to the Congressional testimony of Trump’s advisers and ambassadors, to the statements of Rudy Giuliani and William Barr, and even the President’s efforts to influence the inquiry, The Impeachment Report offers readers the full findings of the Intelligence Committee’s investigation, the articles of impeachment themselves, a rebuttal report from Republican representatives that disputes the process and results of the Democratic investigation, an introduction by esteemed attorney Alan Dershowitz, and information about the impeachment process itself. It is the ultimate resource for anyone who wants to know whether impeachment is warranted, and is a critical text in the ongoing back-and-forth battle to protect American democracy.

Alan Dershowitz is one of the most famous and celebrated lawyers in America. He was the youngest full professor in Harvard Law School history, where he is now the Felix Frankfurter Professor of Law, Emeritus. Dershowitz is the author of numerous bestselling books, including the New York Times bestseller The Case Against Impeaching Trump. ​
Loading...
or
Not Currently Available for Direct Purchase