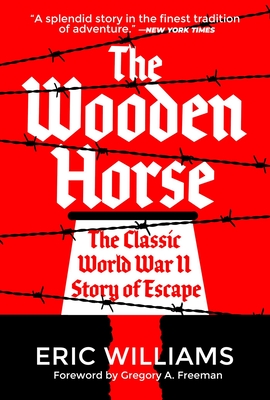 An epic adventure—the most brilliant escape and evasion from the Nazis ever written.

Eric Williams, a Royal Air Force bomber captain, was shot down over Germany in 1942 and imprisoned in Stalag Luft III, the infamous German POW camp. Digging an underground tunnel hidden beneath a wooden vaulting horse, he managed to escape after ten months and, accompanied by a fellow officer, made his way back to England. In this thinly fictionalized retelling, Williams relates his story in three distinct phases: the construction of a tunnel (its entrance camouflaged by the wooden vaulting horse in the exercise yard) and hiding the large quantities of sand he dug; the escape; and the journey on foot and by train to the port of Stettin, where Williams and his fellow escapee stowed away aboard a Danish ship, the Norensen.

From painstakingly digging the tunnel to secretly depositing the dirt and gravel around the camp to dodging searchlights and search dogs and climbing barbed wire fences, this is an escape story hard to beat. For sheer heroism, courage, and perseverance, this classic is arguably the most ingenious POW escape of WWII. The Wooden Horse became a legend among servicemen long before its publication in 1949 and has remained one ever since.

Eric Williams was an RAF pilot in World War II. He was shot down over Germany and managed to evade capture for three days before being found and sent to a prison in Poland. After a successful escape, he was recaptured and transferred to Stalag-Luft III, from which he also escaped. He died in 1983.

Gregory A. Freeman is an award-winning writer with more than twenty-five years’ experience in journalism and narrative nonfiction. His books include The Forgotten 500: The Untold Story of the Men Who Risked All for the Greatest Rescue Mission of World War II; The Gathering Wind: Hurricane Sandy, the Sailing Ship Bounty, and a Courageous Rescue at Sea; and The Last Mission of the Wham Bam Boys.
Loading...
or
Not Currently Available for Direct Purchase