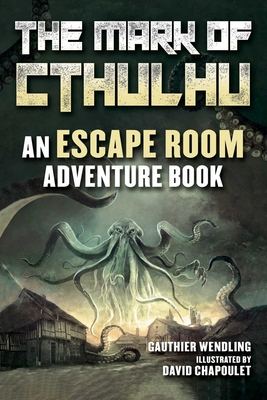 The Mark of Cthulhu

A choose-your-own escape room adventure book based on one of H.P. Lovecraft's most feared creations—Cthulhu.

Are you ready to dive into the ruthless world of Lovecraft? You will meet the worst creature the world has ever known: Cthulhu, the ancient god who dwells in the seabed. The latter has been awakened and is determined to trigger the end of the world.

With his relentless logic, analytical mind, and sense of observation, there is no doubt you will have to be better than the old God to hope to escape his mystical traps.

Inspired by real-life escape rooms that are all the rage, these are choose-your-own escape books. The reader is stranded in a place and must escape in order to survive. To escape, you must explore the different rooms, look for clues, solve puzzles to unlock certain situations, and hope to get out alive! Use the notebook to collect your clues. Take care, because there is only one way out, so you'll have to be smarter than the one who locked you here. Good luck!

Gauthier Wendling has been teaching literature since 2003 and writing gamebooks and escape books since 2015. As a teenager, he discovered Lovecraft's cosmic horror tales, Sherlock Holmes' investigations, and Ian Livingstone and Steve Jackson’s popular gamebooks. In turn, he took up the pen to pay homage to these different genres. He has also created board games and game boxes for the Louvre museum and for popular licenses like Dreamworks Dragons or Minecraft.
Loading...
or support indie stores by buying on