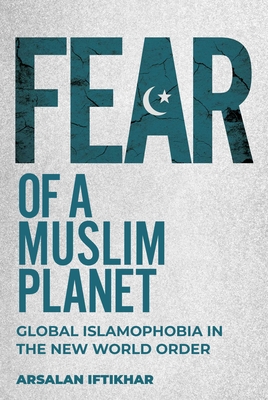 Fear of a Muslim Planet

Human rights lawyer Arsalan Iftikhar takes on Islamophobia through the lens of the brutal Christchurch slaughter.

In March 2019, a heavily-armed white supremacist walked into two mosques in Christchurch, New Zealand and slaughtered fifty-one innocent Muslim worshippers while broadcasting on Facebook Live for the world to see. After the Christchurch mosque massacre, authorities found the white supremacist’s seventy-four-page racist manifesto called “The Great Replacement,” which railed against Muslims and the idea that brown Muslim folks were ultimately going to “replace” white people in his irrational “Fear of Muslim Planet.”

Fear of a Muslim Planet begins with the treacherous legacy of the white supremacist “Great Replacement” theory in the aftermath of the Christchurch massacre. One of the heroes for the Christchurch shooter was the infamous Norwegian anti-Muslim terrorist named Anders Breivik, who brutally murdered seventy-seven people in 2011 in Norway’s worst terrorist attack ever and whose own 1,500-page fascist manifesto promoted thr “Great Replacement” worldview that Muslim immigrants posed a danger to Western societies.

As the book further illustrates, minority victims of the “Great Replacement” conspiracy theory are not limited to Muslims alone. In October 2018, the Tree of Life synagogue in Pittsburgh was devastated when a white supremacist brutally executed eleven innocent Jewish congregants in a horrific act of anti-Semitic terrorism (it was the single deadliest attack exclusively targeting Jews ever to happen in the United States). The shooter later told police that he was inspired to commit these murders because Donald Trump was not doing enough to stop immigration. “Open your Eyes!” the shooter posted on social media in a disjointed anti-Semitic and Islamophobic manifesto. “It’s the filthy EVIL jews Bringing the Filthy EVIL Muslims into the Country!!”

The presidency of Donald Trump has only exacerbated the growth of Islamophobia in America today. Fear of a Muslim Planet outlines the blatantly anti-Muslim statements and policies of Trump and his closest political circle. From telling CNN’s Anderson Cooper that “I think Islam hates us” to calling for a “complete and total shutdown” of Muslims entering the United States, the Trump presidency has only made the xenophobic specter of Islamophobia grow today.

The book will also show that Islamophobia is not simply an American (or Western) problem either. Fear of a Muslim Planet will show the genocidal levels of Islamophobia in places like China and Myanmar. The European fixation on policing Muslim women’s hijab (headscarf) is another focal point. The book ends with a clarion call for mutual understanding and coexistence among people of all backgrounds, if we have the courage to summon our better selves and look beyond each other’s race, religion, and ethnic backgrounds.

Arsalan Iftikhar is an international human rights lawyer, global media commentator, and founder of TheMuslimGuy.com. A longtime contributor for National Public Radio (NPR) and former Georgetown University senior research fellow, his media interviews have appeared on virtually every major media outlet in the world including CNN, BBC World News, Al-Jazeera English, PBS NewsHour, Rolling Stone, TIME, The Economist and NBC News's Meet The Press. A proud native of Chicago, Arsalan graduated from Washington University in St. Louis and he is also a past recipient of the Distinguished Young Alumni Award from Washington University School of Law where he received his law degree.
Loading...
or support indie stores by buying on