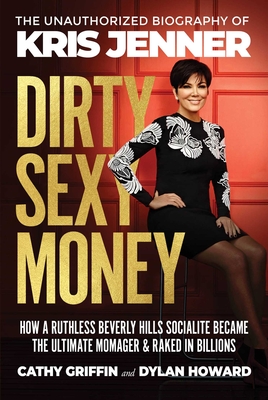 The Unauthorized Biography of Kris Jenner

A True Story of Ambition, Wealth, Betrayal and how a Ruthless Beverly Hills Socialite Became the Ultimate Momager and Raked In Billions

Dirty Sexy Money: The Unauthorized Biography of Kris Jenner is the definitive account of how a Beverly Hills socialite with little formal education built herself a global empire.

This tell-all tome unravels the family’s meteoric rise to fame and the dark secrets they’ve struggled to hide . . . until now. Together, Howard and Griffin delve behind the headlines and social media hype to tell the true story of Kris’s life—rather than the rosy picture she likes to paint.

Dirty Sexy Money is an unflinching look at Kris’s triumphs and losses, her crises and celebrations, her famous friendships and family conflicts. It examines in unprecedented detail Kris’s troubled two decades with Bruce Jenner and the end of their marriage as Bruce transitioned to Caitlyn; it exposes the truth about her current affair with a much younger man . . . and it reveals what she really thinks of her daughter’s very public marriage to Kanye West.

Inside are a wealth of previously untold stories, including intimate details of how Kim’s sex tape jump-started her career, of the real reasons Kris sold her long-running television reality series—as well as shocking, never-before-heard revelations about her friendships with O.J. Simpson and murdered wife Nicole.

The result is a dramatic narrative account of Kris’s real story as you’ve never heard it before . . . in all its dirty, sexy glory.

In 2011, Howard was named Entertainment Journalist of the Year at the National Entertainment Journalism Awards, where the judges labelled him the "go-to guy for authoritative showbiz news and analysis on cable and over-the air television." Howard is also the author of Diana: Case Solved. He currently resides in New York City.

For fifteen years, Cathy Griffin was the West Coast leg-woman for syndicated entertainment columnist Liz Smith, and her own bylined column Society Bytes appeared for many years in Los Angeles Confidential and Beverly Hills 213 magazines. Griffin was the Los Angeles Bureau Chief for the Australian publication New Idea for almost a decade and was Editor-at-Large of Bauer Publication's Life and Style magazine. She currently lives in Los Angeles.