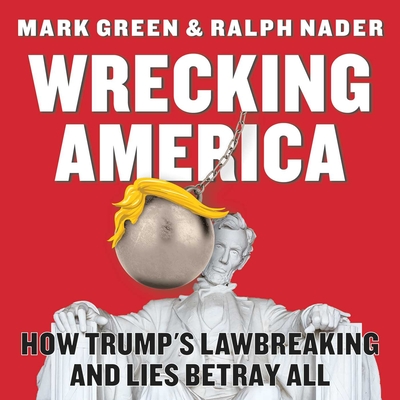 How Trump's Lawbreaking and Lies Betray All

Wrecking America is most up-to-date look at Trump's anything-goes "Fascism 2.0" presidency and campaign. It reveals how Trump's daily "twistifications" (a Jefferson coinage) are killing tens of thousands of Americans and millions of American jobs, polluting the air and public debate, selling out his country for personal gain...and trying to "Make the Confederacy Great Again," as he preoccupies himself with golfing, seething, and tweeting.

This November will test our 231-year experiment in self-governance like no time since 1860 and 1932. Will it be re-election or realignment? A Fascism for the few or Democracy for all?  The wrecking ball of American Brownshirts or a new progressive backlash and era?

Praise For Wrecking America: How Trump's Lawbreaking and Lies Betray All…

"Wrecking America is one of the more important books of the year."
--Larry King

"Read Fake President for proof positive that the accidental occupant of the White House, who only played a businessman on TV,  will lash out at any criticism, no matter how helpful, and follow any praise, even from Russia or Saudi Arabia. This book can help us replace Trump with truth."
-- Gloria Steinem

Mark Green is the author or editor of 24 books including the bestselling Who Runs Congress? and The Book on Bush and the former elected public advocate and consumer commissioner of New York City (1990-2001). He is also the founder of the progressive shadow cabinet @ShadowingTrump, consisting of 21 leading scholars and former officials.

Ralph Nader, America’s leading public interest lawyer and consumer advocate, was named by The Atlantic as one of the hundred most influential figures in American history, and by Time and Life magazines as one of the most influential Americans of the twentieth century. His first book, the bestselling Unsafe at Any Speed, was responsible for US auto safety standards shown to have saved 3.5 million lives over fifty years.