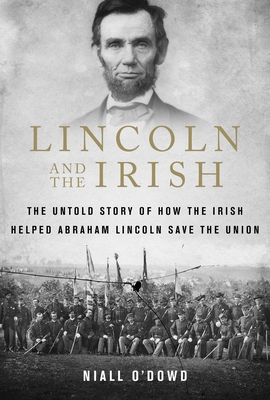 Lincoln and the Irish

From the founder of IrishCentral, a fascinating piece of Civil War history: Lincoln’s relationship with the immigrants arriving in America to escape the Irish famine. “If you’re a Lincoln fan like me, you’ll love this book.” —Liam Neeson

When Pickett charged at Gettysburg, it was the all-Irish Pennsylvania 69th who held fast while the surrounding regiments broke and ran. And it was Abraham Lincoln who, a year earlier at Malvern Hill, picked up a corner of one of the Irish colors, kissed it, and said, “God bless the Irish flag.”

Renowned Irish-American journalist Niall O’Dowd gives unprecedented insight into a relationship that began with mutual disdain. Lincoln saw the Irish as instinctive supporters of the Democratic opposition, while the Irish saw the English landlord class in Lincoln’s Republicans. But that dynamic would evolve, and the Lincoln whose first political actions included intimidating Irish voters at the polls would eventually hire Irish nannies and donate to the Irish famine fund.

When he was voted into the White House, Lincoln surrounded himself with Irish staff, much to the chagrin of a senior aide who complained about the Hibernian cabal. And the Irish would repay Lincoln’s faith—their numbers and courage would help swing the Civil War in his favor, and among them would be some of his best generals and staunchest advocates.

Praise For Lincoln and the Irish: The Untold Story of How the Irish Helped Abraham Lincoln Save the Union…

“We’ve had Thomas Cahill’s excellent How The Irish Saved Civilization and now Niall O’Dowd has penned a terrific book that should be titled 'How The Irish Saved The Union.' O’Dowd introduces us to a wealth of Irish characters who had an enormous impact on Abraham Lincoln and the outcome of the Civil War. . . . Delve into this book on any page and you will find delicious little stories of the affection our most loved and cherished president had for our race, who were considered at the time as Catholic rabble by many on the east coast. If you’re a Lincoln fan like me, you’ll love this book.” —Liam Neeson, award-winning actor

"In these times when some would make of America a cold house for emigrants, Niall O’Dowd has done well to remind us of how the greatest American icon, Abraham Lincoln, changed from a position of suspicion of Irish immigrants to one of gratitude and deep regard for them. As the book reveals, he was deeply touched by their outstanding role in his life and by their sacrifices in his battle to preserve the fragile flower of democracy."—Tim Pat Coogan, historian and best-selling author of The IRA, Michael Collins, and Wherever Green is Worn

Lincoln and the Irish is an impressive work of scholarship that will be studied by Lincoln fans, Irish and American History buffs, and students of democracy. It also reads like a great historical novel that will engage any reader who picks it up. Niall O’Dowd has burrowed into the archives and presented us with a fast-paced narrative populated with wonderful historical characters such as the Confederate priest Fr. Patrick Bannon, the great Union Generals Meagher and Corcoran, and the Irish transgender Union Hero Albert Cashier/Jennie Hodgers. Underpinning these wonderful stories of Irish and Irish American heroes, heroines, and villains is the complex relationship between Lincoln and the millions of Irish who found refuge from famine and oppression in America, and who helped the Great Emancipator defeat slavery and cement America’s democracy. This is not only an important book but as engrossing a read as I’ve come across in a long time. “—Terry George, Oscar-winning writer and director of Hotel Rwanda, In the Name of the Father, and Some Mother’s Son

Niall O’Dowd is the founder of IrishCentral, Irish America Magazine, and the Irish Voice newspaper. He is also responsible for publishing IrishCentral.com and the Irish Emigrant newspaper in Boston. Niall was awarded an honorary doctorate by University College Dublin for his work on the Irish peace process, which was a subject of a book, Daring Diplomacy, and a PBS Special, An Irish Voice. He has written for the New York Times, the Guardian, Huffington Post, and the Irish Times. He lives in New York City.
Loading...
or support indie stores by buying on