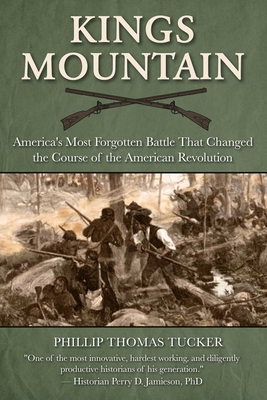 Learn the little-known history of the turning-point battle of Kings Mountain, one of the most decisive American victories in the Revolutionary War.

The Battle of Kings Mountain was the most remarkable, unexpected, and unorthodox patriot victory of supreme importance that was fought during the course of the American Revolution. The victors of Kings Mountain were South Carolina, Virginia, and North Carolina Backcountry volunteers (including men from today’s Tennessee) of a ghost army that suddenly materialized practically out of thin air from both sides of the Appalachian Mountains on its own and without authorization from the Continental Congress or Continental officers. To defend their farms and families and the land they loved, on October 7, 1780, this ad hoc force of Backcountry volunteers from remote settlements across the frontier suddenly descended upon a well-trained and well-equipped force of more than one thousand Royal Provincial and Loyalist troops, who defiantly made their last stand on the summit of Kings Mountain, after having been caught by surprise.

Ironically, no battle of the American Revolution more forcefully demonstrated the lethal effectiveness of Southern militia and the future surreal horrors of America’s first civil war. This decisive battle in northwest South Carolina was fought between fellow Americans, including not only neighbors but also relatives, even fathers and sons, nearly three-quarters of a century before the Battles of First Manassas, Antietam, and Gettysburg, when young Americans once again slaughtered each other for what they believed was right.

When it appeared at the time that the war in South Carolina had been lost to the British, the patriots of Kings Mountain rose splendidly to the challenge to win an amazing success that best personified the essence and spirit of the revolution, which the victors kept alive during one of the darkest periods of the American Revolution. Most importantly, the dramatic patriot victory at Kings Mountain on October 7, 1781 helped to set the stage and pave the way for the surrender of Cornwallis’ Army at Yorktown only a year later, which was an event that all but ended the war and ensured the independence of a new nation.

Phillip Thomas Tucker, PhD, is a writer and historian who has edited and authored more than sixty-five books. After earning his PhD in 1990 from St. Louis University in St. Louis, Missouri, he took a position as civilian historian with the Department of Defense and specialized in air force history. His previous books include Pickett's Charge, How the Irish Won the American Revolution,  George Washington’s Surprise Attack, Exodus from the Alamo, and Father of the Tuskegee Airmen, John C. Robinson. He lives in central Florida.
Loading...
or support indie stores by buying on