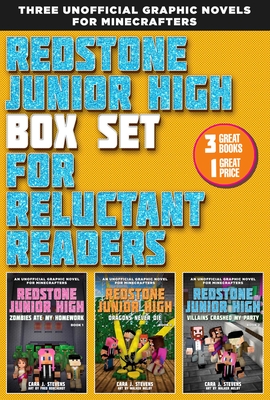 For fans of Minecraft and graphic novels, a full-color box set of three bestselling adventures for reluctant readers.

When quiet farm girl Pixel receives an acceptance letter from the prestigious academy for gifted students, Redstone Junior High, she is thrilled! And she works up the courage to leave her family and her beloved farm animals to become a Redstone student. The school prides itself on its safety record as much as its academics—Mob-free for more than 100 years! boasts a sign on campus.

Little does Pixel know that the school's long history of safety is about to take an unsettling turn. When zombies begin popping up on campus, the students begin to panic. Pixel, with the help of her new best friends, is the only one who can figure out why the zombies are invading -- but can she do it before the school becomes a battlefield?
The adventure that unfolds will test Pixel's courage, reveal a unique and precious gift that she never knew she had, and change how she treats hostile mobs forever.

Enrollment at Redstone Junior High is at an all-time low since word got around that hostile mobs were spotted on campus. Principal Redstone will do just about anything to keep students from leaving to attend the rival school, Combat Junior High, but a growing unease is making this difficult. To make matters worse, frightened creepers alert Pixel that the S.A.M.D. is still alive and well and trying to harvest innocent mobs for their drops.

When Tina suggests hosting a school party to boost morale, Pixel and her friends play along and devise their own secret plan to trap the S.A.M.D. and its evil leader, Smite. Will Pixel and her friends succeed in luring their enemies to the party so they can battle to the finish, or will Tina's plan for revenge and Smite's dark powers stop them dead in their tracks? With creepers on the scene, one thing is sure: This party will end with a bang.

Fred Borcherdt is a former Sega video game designer with many years of experience designing and developing products for the digital world. When he's not playing Minecraft with his kids or designing video games, he's teaching Lego Robotics classes at local elementary schools. Fred lives in the Boston area.