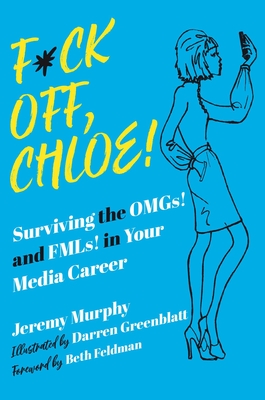 Surviving the OMGs! and FMLs! in Your Media Career

A laugh-out-loud account of working in media!
Public relations' snarkiest publicist Jeremy Murphy expertly chronicles his hatred, love, indifference, amusement, and scorn for the profession in F*ck Off, Chloe!. From entitled millennials to surly reporters, obnoxious clients, and cumbersome, color-coded “trackers,” Murphy takes a scalpel and glass of Châteauneuf-du-Pape to the PR industry in a searing, hilarious, and pissy voice that his own psychiatrist finds “deeply concerning.” His collection of annoyances shed light on the industry’s idiosyncrasies, insanities, contradictions, and past due invoices, providing an illuminating window into the dirty world of public relations not even Xanax can help. Complementing the scathing prose are color-in illustrations by artist Darren Greenblatt, creator of the “Ugly Lives of Beautiful People” sketch series.

Jeremy Murphy is a sarcastic, embittered veteran of the media industry. Founder of 360bespoke, a respected boutique PR agency in New York, Murphy handles a full roster of clients in the lifestyle, beauty, fashion, and start-up fields. Previously, he was Vice President of Communications at CBS, where he worked for 14 years. There, he oversaw PR for many of its divisions and created its glossy magazine Watch. Murphy started as a journalist, working with Knight Ridder newspapers and Mediaweek. He is a graduate of Florida Atlantic University and lives in New York with his cat, Champers.

Darren Greenblatt has sketched fashion collections since he was a child growing up in Pennsylvania. He moved to NYC to attend The Fashion Institute of Technology. Darren has written two books and created and sold two TV show pilots for Fox and NBC/Sony. Darren has been featured in Vogue, Harper’s Bazaar, Allure, Marie Claire, and Women’s Wear Daily, and his designs have been sold at Bloomingdales, Bergdorf Goodman, Saks Fifth Avenue, Kirna Zabete, and Jeffrey New York. Darren has appeared on The Apprentice, CNN, The Today Show, Rachael Ray, and The View. After 26 years in New York City, Darren and his family moved to Princeton, New Jersey, in 2015, where he paints and designs from his studio.
Loading...
or support indie stores by buying on