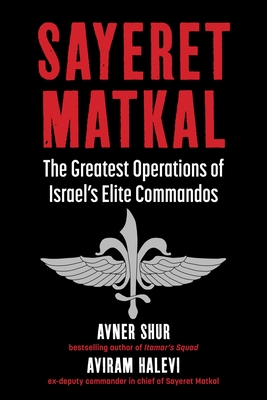 Sayeret Matkal depicts the greatest operations of Israel’s elite commando force from the perspective of the people who were there—the soldiers and their commanders, many of whom became Israel's top leaders and politicians: people such as Benjamin Netanyahu, Moshe Ya’alon, and Ehud Barak. In riveting prose and fascinating detail, the book tells the stories of operations such as Spring of Youth, in which PLO terrorists were killed in their homes in Beirut; the daring hostage rescue mission in Entebbe, Uganda, one of the unit's most glorious operations; the assassination of Abu Jihad in Tunis, Tunisia, and many more. First and foremost, this is a book about the remarkable people who made Israel’s legendary commando unit an icon of determination, ingenuity, and courage.

Avner Shur is the author of Itamar's Squad, a first-hand account of his days in Sayeret Matkal, a steady bestseller for over fifteen years. He is also the author of Border Crosser, a biography of Avraham Arnan, the founder of the unit, and of Fire and Silence, a biography of Yohai Ben-Nun, the founder of Israel’s Navy SEALS unit, which he co-wrote with Aviram Halevi.

Aviram Halevi, ex-deputy commander in chief of Sayeret Matkal, served in the IDF Intelligence Corps for many years, and reached the rank of lieutenant-colonel. Apart from being the CEO of a private digital services company, he makes non-commercial documentary films for Sayeret Matkal and is currently working with Avner Shur on a book dedicated to Operation Spring of Youth.
Loading...
or support indie stores by buying on