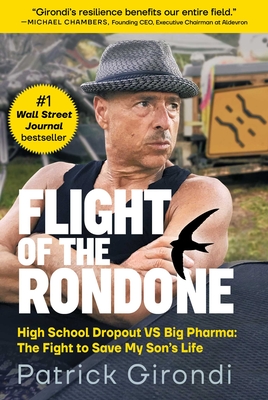 High School Dropout VS Big Pharma: The Fight to Save My Son's Life

Flight of the Rondone is a true rags to riches tale the New York Times stated is “meant for television.” The protagonist, a high school dropout, is nicknamed in Italian U Carneveil (Walking Circus) for his entertaining and eccentric nature. Patrick Girondi starts his career shining shoes, stealing car parts, and escaping life-threatening situations while outwitting the Chicago police. He claws up to being a famous success story on the Oprah Show. His fortunes quickly change when his eldest son, Santino, is diagnosed with a fatal blood disease. Girondi hunts for a cure in a drama that has boundless implications in the world of gene therapy. As Girondi writes, “I’d been strangled, shot at, skated more than twenty arrests, made it through 3 FBI witch-hunts and went from the docks to trading and big money. I would see my son cured. How hard could it be?” After decades of struggle, he delivered the world’s first commercial batch of vector with the potential to cure Sickle Cell Disease and Thalassemia. But again, the success of the cure—and the fate of his son—is imperiled, in a world of lab jackets, mysterious deaths, and cut-throat Wall Street banksters.

This is a story of love, beating the odds, or as Girondi calls it, pure luck. It is a gritty and realistic tale told with little regard for empire or etiquette.

Praise For Flight of the Rondone: High School Dropout VS Big Pharma: The Fight to Save My Son's Life…

“We knew that you are a loving father, an indefatigable advocate and doer for a good cause, and a talented musician: we did not yet know that you are also a riveting writer: BRAVO!” --Lucio Luzzatto, MD, Professor of Hematology and former Chairman of the Ethics Committee of the American Society for Gene Therapy

Patrick Girondi, originally from the South Side of Chicago, is an Italian-American singer-songwriter, author, and founder of a gene therapy company. Girondi has released five music albums and published the book Diamond in the Rough.
Loading...
or support indie stores by buying on