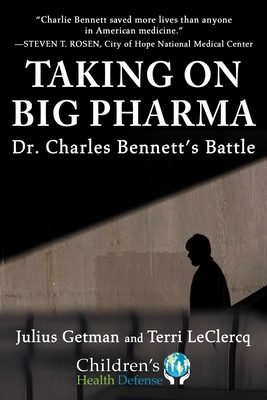 The battle between Big Pharma and scientific integrity

Bennett’s work also created enemies: Bennett was accused, on the basis of flimsy evidence, of mishandling government grant money and violating the False Claims Act. Powerful interests within Big Pharma, academia, and law enforcement joined in the attack on Bennett. By 2010, he was forced from his academic position; was besieged by lawsuits; and became the victim of a coordinated, well-funded campaign to discredit him and refute his work. From pharma superstar to disgrace and disrepute in the blink of an eye.

Taking On Big Pharma explores Bennett’s achievement and evaluates the charges against him. Exposed is the unsettling relationship between the pharmaceutical industry and academia. The result of more than five years of research and hundreds of hours of interviews with scientists, academicians, and federal prosecutors, this is an unflinching look at how institutions, purportedly devoted to public health and education, can be corrupted for profit—from drug sales or research grants.

“A powerful investigation into the Powers that control medical research; Getman and LeClercq reveal that Dr. Charles Bennett should be labeled a Science Hero.”
—Shelley Broderick, Dean Emerita and Joseph L. Rauh Chair of Social Justice University of the District of Columbia David A. Clarke School of Law.

“Getman and LeClercq have found, investigated, and written such a powerful story! I got goosebumps from reading it. While terribly sad, the prose is masterful. Their
trenchant, page-turning, and gut-wrenching story of Dr. Charlie Bennett will shock and sadden all but the most cynical. The gifted pair examine the corrosive impact of greed that is tolerated in business, academia, and our justice system. This is greed with a huge price tag as it sacrifices humans for profits. Taking On Big Pharma is a must-read from authors who have transformed the legal landscape to form a better, more humane United States of America.”
—Allegra Jordan, "Architect of Change" designee by Maria Shriver, Duke University, associate adjunct professor at Pratt School of Engineering

"Taking On Big Pharma: Dr. Charles Bennett’s Battle is a must-read for anyone who has ever taken a prescription drug. I have personally led a successful investigation of several big pharma companies, and the lessons learned from reviewing Dr. Bennett's experience are critical to protecting the public health. The experience of persons like Dr. Bennett have rarely been made public. It is shocking that the attacks against him were so powerful and were carried out by big pharma, academia, and the Department of Justice. The lessons learned and the recommendations for the future outlined by Getman and LeClerq are must-reads. It is unlikely that anyone else's personal experience will be this well documented in the future.”
—Rob Hennig, JD, PhD

“Charlie has no idea of how many people think of him as their hero. He was their voice. ‘Floxed patients’ often feel lonely and abandoned. Charlie let them know that they had important support.”
—Linda Martin, drug victim advocate

“I quote Mark Twain: ‘The two most important days in your life are the day you are born and the day you realize what you were born for.’ I found in reading the book that Dr. Charles Bennett was born to blow the whistle on big pharma.”
—John C. Brittain, Olie W. Rauh Professor of Law, University of the District of Columbia, David A. Clarke School of Law

“When a researcher responsible for ‘saving more lives than anyone in American medicine’ is seen as a spoiler of hundreds of millions in Big Pharma profits, the stakes are extremely high—and the outcomes tragic.”
—Terence Young, chair of Drug Safety Canada, author Forbidden Knowledge: What Big Pharma Will Never Tell You About Prescription Drugs

“After Elizabeth Holmes and Theranos; the Sackler family and OxyContin; tobacco executives and lung cancer; and the fossil fuel industry and climate change, can anyone be shocked when big business, in its endless pursuit of the last dime, cuts corners, kills, maims or injures people, denies all responsibility, and does its dead-level best to pummel their accusers into silent submission? The answer is, “Yes! Absolutely.” All you need to do is read Professors Jack Getman and Terri LeClercq’s latest book. Unless you draw a paycheck from a pharmaceutical company, the corruption and collusion they uncover that Big Phama used to silence Charlie Bennett will infuriate you. In short, don’t read Taking On Big Pharma: Dr. Charles Bennett’s Battle with a mouth full of milk. You’ll spew it everywhere. But do read it. It’s a doozy of a story about how Big Business, religious institutions, university administrators, and corrupt politicians all work to obfuscate and extricate if that’s what they need to keep the moneychangers busy. In the end, it’s generally the salaried worker, or the older couple living on Social Security next door; or the courageous whistleblowers who are most likely to be crushed under the heel of well-meaning incompetents or blue-collar criminals. If all of this sounds too jaded, too negative — good. It’s meant to.”
— Bobby Hawthorne, writer, journalist, writing instructor

“This stunning book is a must-read for those interested in issues at the intersection of science and law. Getman and LeClercq, award-winning authors and academics, trace the story of Charles Bennett, a prominent academic oncologist who saved hundreds of lives by documenting the dangers of a bestselling drug. Rather than then being celebrated as a hero, Bennett was dragged through legal proceedings and treated like a pariah in his home institution. This book calls on us to rethink the design of key legal proceedings, such as qui tam, that corporations can use to dodge legal accountability and to tarnish the reputations of our best, most dedicated scientists.”
—Wendy Wagner is the author of Incomprehensible!: A Study of How Our Legal System Encourages Incomprehensibility, Why It Matters, and What We Can Do About It, and Bending Science: How Special Interests Corrupt Public Health Research

"I loved this suspenseful book—the evils of pharma, academia, and the government is a terrible trifecta.  Lessons learned from The Godfather are plentiful. When is the movie going to be made? I personally am enthusiastic about this.”
—Al Ruddy, coproducer of The Godfather

Professor Julius Getman is an expert in law and academia, and former president of the American Association of University Professors. Among his published works are the Violet Crown Award nonfiction winner In the Company of Scholars: The Struggle for the Soul of HigherEducation and The Betrayal of Local 14, which won a university-wide award. Since 1970, he has represented many faculty members accused of academic misconduct.

Dr. Terri LeClercq, a writing professor for over thirty years, received the Golden Pen Award from the Association of University Professors and is the author of Expert Legal Writing and Guide to Legal Writing. After publication of her educational graphic Prison Grievances, she also consults with prison populations.