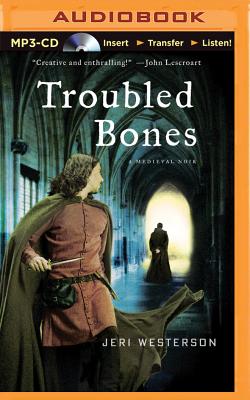 Disgraced knight Crispin Guest gets himself into some serious trouble in London and as a result is forced to accept an assignment far out of town. The Archbishop of Canterbury has specifically requested Guest to investigate a threat against the bones of saint and martyr Thomas a Beckett, which are on display in the cathedral in Canterbury. The archbishop has received letters threatening the safety of the artifacts, and he wants Guest to protect them and uncover whoever is after them. When he arrives at Canterbury, Guest is accosted by an old acquaintance from court - one Geoffrey Chaucer - and is surrounded by a group in town on a pilgrimage. Trapped amongst the pilgrims (who were, quite possibly, the model for Chaucer's famous story cycle), looking for a murderer, a hidden heretic and a solution to the riddle that will allow him to go back home, Crispin Guest finds his considerable wit and intellect taxed to its very limit. Show More Show Less.