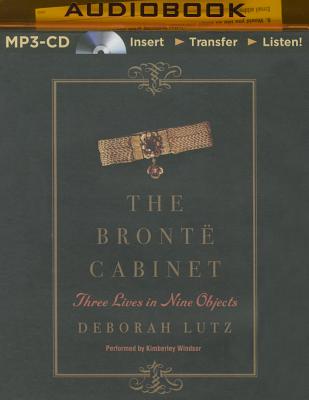 An intimate portrait of the lives and writings of the Bronte sisters, drawn from the objects they possessed. In this unique and lovingly detailed biography of a literary family that has enthralled readers for nearly two centuries, Victorian literature scholar Deborah Lutz illuminates the complex and fascinating lives of the Brontes through the things they wore, stitched, wrote on, and inscribed. By unfolding the histories of the meaningful objects in their family home in Haworth, Lutz immerses listeners in a nuanced re-creation of the sisters' daily lives while moving us chronologically forward through the major biographical events: the death of their mother and two sisters, the imaginary kingdoms of their childhood writing, their time as governesses, and their determined efforts to make a mark on the literary world.

From the miniature books they made as children to the blackthorn walking sticks they carried on solitary hikes on the moors, each personal possession opens a window onto the sisters' world, their beloved fiction, and the Victorian era. A description of the brass collar worn by Emily's bull mastiff, Keeper, leads to a series of entertaining anecdotes about the influence of the family's dogs on their writing and about the relationship of Victorians to their pets in general. The sisters' portable writing desks prove to have played a crucial role in their writing lives: it was Charlotte's snooping in Emily's desk that led to the sisters' first publication in print, followed later by the publication of Jane Eyre and Wuthering Heights.

Charlotte's letters provide insight into her relationships, both innocent and illicit, including her relationship with the older professor to whom she wrote passionately. And the bracelet Charlotte had made of Anne and Emily's intertwined hair bears witness to her profound grief after their deaths. Lutz captivatingly shows the Brontes anew by bringing us deep inside the physical world in which they lived.