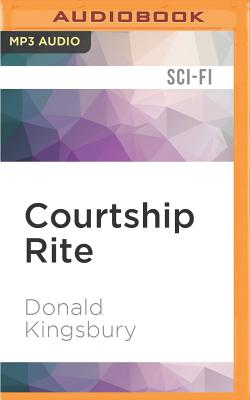 A vast alien landscape, a human culture based on our own, yet evolved in strange ways by the forces of an inimical nature provide a panoramic backdrop for the romantic adventures of a large cast of memorable & attractive characters.

Courtship Rite is an SF novel by American writer Donald Kingsbury, originally serialized in Analog magazine in 1982. The book is set in the same universe as some of his other stories, such as "Shipwright" (1978) and the unpublished "The Finger Pointing Solward". In the UK, the novel was entitled Geta; in France, Parade nuptiale. Courtship Rite was the 1st winner of the Compton Crook Award for best first novel and was nominated for the Hugo Award for Best Novel in 1983.

The novel details the attempts of two of the priest-clans, the Kaiel & the Mnankrei, to expand into territory controlled by the Stgal. Ultimately, all the priest clans are trying to attain dominance of the planet through the use of new technology, propaganda, treachery, and "war", a new concept in this world. Previously, killing was done merely in order to provide food.

Jo Walton remarked that Courtship Rite "is about a distant generation of colonists on a planet with no usable animals. This is the book with everything, where everything includes cannibalism, polyamory, evolution and getting tattoos so your skin will make more interesting leather when you're dead."