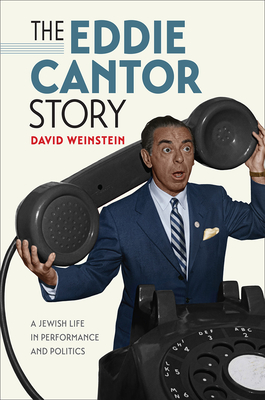 A Jewish Life in Performance and Politics (Brandeis Series in American Jewish History, Culture, and Life)

This absorbing biography chronicles the life and work of one of the most important entertainers of the twentieth century. Eddie Cantor (1892–1964) starred in theater, film, radio, and television. His immense popularity across a variety of media, his pride in his Jewish heritage, and his engagement with pressing political issues distinguished him from other headliners of his era. Paying equal attention to Cantor’s humor and politics, Weinstein documents his significance as a performer, philanthropist, and activist. Many show business figures quietly shed their Jewish backgrounds or did not call attention to the fact that they were Jewish. Cantor was different. He addressed the vital issues of his times, including acculturation, national identity, and antisemitism. He was especially forceful in opposing Nazism and paid a price for this activism in 1939, when a sponsor cancelled the actor’s radio program. In this carefully researched book, Weinstein uncovers sketches and routines filled with Jewish phrases, allusions, jokes, songs, and stories. Cantor frequently did not mark this material as “Jewish,” relying instead on attentive audiences to interpret his coded performances. Illustrated with thirty photographs, The Eddie Cantor Story examines the evolution, impact, and legacy of Cantor’s performance style. His music and comedy not only shaped the history of popular entertainment, but also provide a foundation for ongoing efforts to redefine Jewish culture and build community in contemporary America.

DAVID WEINSTEIN is a senior program officer at the National Endowment for the Humanities. He holds a PhD in American studies, has taught at the University of Maryland and George Mason University, and is the author of The Forgotten Network: DuMont and the Birth of American Television. He lives in Rockville, Maryland, with his wife and two daughters.

Praise For The Eddie Cantor Story: A Jewish Life in Performance and Politics (Brandeis Series in American Jewish History, Culture, and Life)…

“A valuable addition to any performing arts library.”

“David Weinstein manages to make the story of Eddie Cantor’s career timely, instructive, and really rather remarkable. . . . This reconsideration of the career of Eddie Cantor provides an unexpected look at a pioneer in the art of being publicly Jewish. As the old saying goes, ‘Try it, you’ll like it.’”

“According to the comedian Lenny Bruce, ‘Eddie Cantor is goyish.’ But why? Why was it funny to label goyish (non-Jewish) a celebrated performer, born Isidore Itskowitz, proud of his Jewish identity and unusually dedicated to Jewish causes? Among its many other virtues, David Weinstein’s thorough, incisive biographical study of Cantor, focusing on his political activism and fund raising, implicitly explains why Cantor ended up as the butt of Bruce’s joke. . . . I hope that Weinstein’s painstaking biography will help bring more attention to this fascinating figure in American cultural history.”