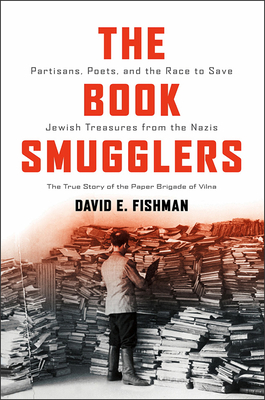 Partisans, Poets, and the Race to Save Jewish Treasures from the Nazis

The Book Smugglers is the nearly unbelievable story of ghetto residents who rescued thousands of rare books and manuscripts—first from the Nazis and then from the Soviets—by hiding them on their bodies, burying them in bunkers, and smuggling them across borders. It is a tale of heroism and resistance, of friendship and romance, and of unwavering devotion—including the readiness to risk one’s life—to literature and art. And it is entirely true. Based on Jewish, German, and Soviet documents, including diaries, letters, memoirs, and the author’s interviews with several of the story’s participants, The Book Smugglers chronicles the daring activities of a group of poets turned partisans and scholars turned smugglers in Vilna, “The Jerusalem of Lithuania.” The rescuers were pitted against Johannes Pohl, a Nazi “expert” on the Jews, who had been dispatched to Vilna by the Nazi looting agency, Einsatzstab Reichsleiter Rosenberg, to organize the seizure of the city’s great collections of Jewish books. Pohl and his Einsatzstab staff planned to ship the most valuable materials to Germany and incinerate the rest. The Germans used forty ghetto inmates as slave-laborers to sort, select, pack, and transport the materials, either to Germany or to nearby paper mills. This group, nicknamed “the Paper Brigade,” and informally led by poet Shmerke Kaczerginski, a garrulous, street-smart adventurer and master of deception, smuggled thousands of books and manuscripts past German guards. If caught, the men would have faced death by firing squad at Ponar, the mass-murder site outside of Vilna. To store the rescued manuscripts, poet Abraham Sutzkever helped build an underground book-bunker sixty feet beneath the Vilna ghetto. Kaczerginski smuggled weapons as well, using the group’s worksite, the former building of the Yiddish Scientific Institute, to purchase arms for the ghetto’s secret partisan organization. All the while, both men wrote poetry that was recited and sung by the fast-dwindling population of ghetto inhabitants. With the Soviet “liberation” of Vilna (now known as Vilnius), the Paper Brigade thought themselves and their precious cultural treasures saved—only to learn that their new masters were no more welcoming toward Jewish culture than the old, and the books must now be smuggled out of the USSR. Thoroughly researched by the foremost scholar of the Vilna Ghetto—a writer of exceptional daring, style, and reach—The Book Smugglers is an epic story of human heroism, a little-known tale from the blackest days of the war.

Praise For The Book Smugglers: Partisans, Poets, and the Race to Save Jewish Treasures from the Nazis…

“In The Book Smugglers, David E. Fishman writes with passion about his subjects and their cultural rescue mission. Though they are physical objects, books possess cultural significance far beyond their monetary value. The Paper Brigade was willing to endanger its lives to save them, and scholars are forever in their debt. The story is inspiring, but one cannot help but wonder how many other treasures were lost.”
— Publishing Research Quarterly

“A beautifully written and enthralling study that sheds important new light not only on an unknown chapter of the Holocaust but also on some of the larger questions of east European Jewish history in the twentieth century. Set in Vilnius, which was called by Jews “the Lithuanian Jerusalem,” the book examines how the local community’s rich intellectual heritage found expression in an astonishing operation of cultural rescue during and after the German occupation. The Book Smugglers is a wonderful read, with prose, particularly characterizations of people and descriptions of rescued treasures, that is quite belles-lettristic in quality.”
— Slavic Review