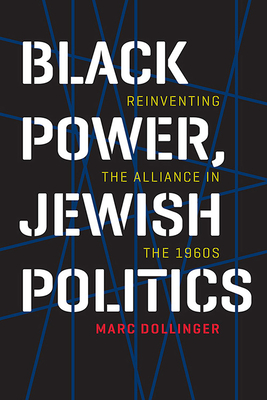 Reinventing the Alliance in the 1960s (Brandeis Series in American Jewish History, Culture, and Life)

Marc Dollinger charts the transformation of American Jewish political culture from the Cold War liberal consensus of the early postwar years to the rise and influence of Black Power–inspired ethnic nationalism. He shows how, in a period best known for the rise of black antisemitism and the breakdown of the black-Jewish alliance, black nationalists enabled Jewish activists to devise a new Judeo-centered political agenda—including the emancipation of Soviet Jews, the rise of Jewish day schools, the revitalization of worship services with gender-inclusive liturgy, and the birth of a new form of American Zionism. Undermining widely held beliefs about the black-Jewish alliance, Dollinger describes a new political consensus, based on identity politics, that drew blacks and Jews together and altered the course of American liberalism.

“Black Power, Jewish Politics is essential reading to anyone interested in the history of Jewish Americans, Black/Jewish relations, civil rights, and twentieth-century politics, as well as to contemporary political activists.”
— American Jewish History

“Dollinger’s well-written and provocative work provides an innovative interpretation of the mythic story of the alliance between Jews and blacks forged over the twentieth century and rent asunder in the post–civil rights era as a result of the rise of black power.”
— Journal of American History

“Dollinger offers a highly detailed, engrossing depiction of the responses of major Jewish organizations to the Civil Rights Movement and to the varied government and public policy understandings of racism and proposals for remediation. . . . [By] examining the positions of major Jewish organizations, this book reconfigures the standard narrative in crucial ways and makes an important contribution to Jewish cultural and political history. . . . Dollinger has reoriented the field of Black-Jewish relations in crucial ways and changed the way we think about American Jewish history in the post–World War II era. This is an important book and an exciting book.”
— Shofar

“The honesty of this book, the willingness of the author to tackle a number of subjects, uncomfortable even decades later, makes it an important contribution. It offers a well-researched set of chapters, cogently structured and based on a deep immersion in the primary sources. The fact that the title Black Power, Jewish Politics puts African Americans first, making them the pivotal players and African American ideology the dominant force in shaping Jewish action, deserves credit as well.”
— American Jewish Archives Journal

"Dollinger upends and revises our understanding of the relationship between black and Jewish Americans in the mid-twentieth century. This is a thoroughly researched, well-written corrective."
— American Journal of Sociology

"This book provides an important intervention in American Jewish history…Jews, particularly although not exclusively the younger rising generation born in the post–World War II era and very much participants in the assertive politics of the 1960s, learned from African Americans and created a new political culture that in turn shook up Jewish life in America."
— American Jewish Archives Journal

"Historian Marc Dollinger has a knack for challenging the reigning academic paradigms and conventional wisdom about Jewish politics. . . . In his recent book, Black Power, Jewish Politics, Dollinger seeks to reframe decades of scholarship about Jews and the civil rights movement, Black-Jewish relations, and American Jewish politics. . . . Dollinger’s alternative view of Black-Jewish relations chooses agency and hope rather than cynicism. This is a book of and for our time."
— Australian Journal of Jewish Studies

“Dollinger’s illuminating book illustrates that many American Jewish leaders were not only sympathetic to Black Power but were supportive of it. . . . This book will significantly change how we view the American Jewish 1960s and their aftermath.”

MARC DOLLINGER is the author of Quest for Inclusion: Jews and Liberalism in Modern America, and co-editor of California Jews and American Jewish History: A Primary Source Reader. He holds the Richard and Rhoda Goldman Chair in Jewish Studies and Social Responsibility at San Francisco State University.
Loading...
or
Not Currently Available for Direct Purchase