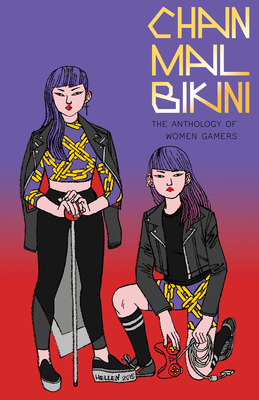 The Anthology of Women Gamers

Chainmail Bikini is an anthology of comics by and about female gamers Forty cartoonists have contributed comics about the games they're passionate about--from video games to tabletop role-playing to collectible card games. The comics in Chainmail Bikini explore the real-life impact of entering a fantasy world, and how games can connect us with each other and teach us about ourselves. Alliances are forged, dice get rolled, and dragons get slain Chainmail Bikini shows that while women are not always the target market for gaming, they are a vital and thoroughly engaged part of it, and are eager to express their personal take as players, makers, and critics of games.

Chainmail Bikini is edited by Hazel Newlevant (If This Be Sin), and features a cover illustration by Hellen Jo and comics by established talents and rising stars including Annie Mok, Jane Mai, Molly Ostertag, MK Reed, and Sophie Yanow.

Hazel Newlevant: Hazel Newlevant is a cartoonist living in Queens, NY. Her comic Ci Vediamo was awarded a Xeric Grant, and her graphic novel If This Be Sin was awarded the 2013 Prism Comics Queer Press Grant.Sophie Yanow: Sophie Yanow has been an artist in residence at La Maison de la Bande Dessinee, and the fellow at the Center for Cartoon Studies. Her comic War of Streets and Houses was nominated for the Doug Wright Spotlight Award and the Ignatz Award for Outstanding Graphic Novel.Jane Mai: Jane Mai is a freelance illustrator and comic artist from Brooklyn, New York. Her work has appeared in several anthologies and self-published zines. Her comics Sunday in the Park with Boys and See You Next Tuesday are published by Koyama Press.Molly Ostertag: Molly Ostertag graduated from the School of Visual Arts in 2014. She makes comics with a focus on powerful women of all kinds, and draws the webcomic Strong Female Protagonist. Her work has received an SVA Alumni Society grant.?MK Reed: MK Reed is the author of Americus & The Cute Girl Network, from First Second. Americus was the winner of NAIBA's 2012 Carla Cohen Free Speech Award, and was a 2011 American Booksellers for Children's New Voices title. The first chapter was nominated for an Ignatz for Outstanding Story in 2008.
or
Buy Here
Copyright © 2020 American Booksellers Association