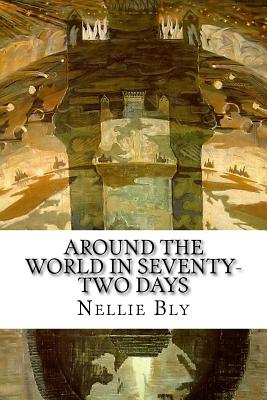 Around the World in Seventy-Two Days

Around the World in Seventy-Two Days is a book by journalist Elizabeth Jane Cochrane, writing under her pseudonym, Nellie Bly. The chronicle details her 72-day trip around the world, which was inspired by the book, Around the World in Eighty Days by Jules Verne. She carried out the journey for Joseph Pulitzer's tabloid newspaper, the New York World. As a result of rough weather on her Pacific crossing, she arrived in San Francisco on the White Star liner Oceanic on January 21, two days behind schedule. However, World owner Pulitzer chartered a private train to bring her home, and she arrived back in New Jersey on January 25, 1890, at 3:51 p.m. Bly arrived back in New York seventy-two days and six hours after leaving Hoboken. At the time, Bisland was still going around the world. Like Bly, she had missed a connection and had to board a slow, old ship (the Bothina) in the place of a fast ship (Etruria). Bly's journey, at the time, was a world record, though it was bettered a few months later by George Francis Train, who completed the journey in 67 days. By 1913, Andre Jaeger-Schmidt, Henry Frederick and John Henry Mears had improved on the record, the latter completing the journey in less than 36 days.