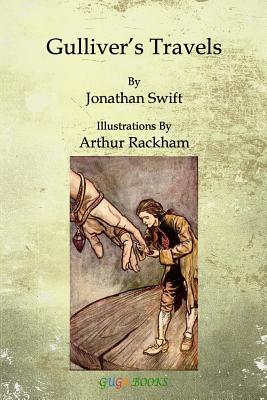 Thank you for checking out this children's classic by Guga Books. We appreciate your business and look forward to serving you soon. We have thousands of titles available, and we invite you to search for us by name, contact us via our website, or download our most recent catalogues. THEN I found myself on my Feet, I looked about me, and must confess I never beheld a more entertaining Prospect. The Country round appeared like a continued Garden, and the inclosed Fields, which were generally Forty Foot square, resembled so many Beds of Flowers. These Fields were intermingled with Woods of half a Stang, and the tallest Trees, as I could judge, appeared to be seven Foot high. I viewed the Town on my left Hand, which looked like the painted Scene of a City in a Theatre. I had been for some Hours extremely pressed by the Necessities of Nature; which was no Wonder, it being almost two Days since I had last disburthened myself. I was under great Difficulties between Urgency and Shame. The best Expedient I could think on, was to creep into my House, which I accordingly did; and shutting the Gate after me, I went as far as the Length of my Chain would suffer, and discharged my Body of that uneasy Load. But this was the only Time I was ever guilty of so uncleanly an Action; for which I cannot but hope the candid Reader will give some Allowance, after he has maturely and impartially considered my Case, and the Distress I was in. From this Time my constant Practice was, as soon as I rose, to perform that Business in open Air, at the full Extent of my Chain, and due Care was taken every Morning before Company came, that the offensive Matter should be carried off in Wheel-barrows, by two Servants appointed for that Purpose.