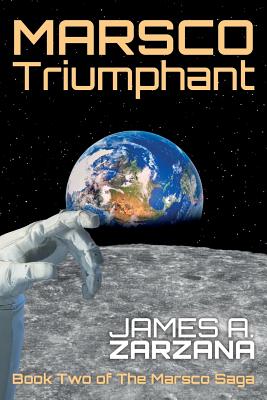 By James a. Zarzana

Humanity is controlled by Marsco, a megacorporation whose authoritarian regime extends past Earth into the planet's growing space colonies. All computer access, most space travel and commerce fall under Marsco's control.

After the events of The Marsco Dissident, the corporation's enemies and allies have regrouped to consider their options. For Martin Herriff, the relative calm offers an opportunity to complete work on the first interstellar spaceship-a vessel he and his friends plan to use to elude Marsco's all-encompassing grasp.

For Arnold Wilkes, better known as Hawkins, the time has come to restart a war he lost twenty-five years ago, a war that could drive Earth back to the chaos that allowed Marsco to assume power in the first place.

As old friends, lovers, and enemies reunite, plot, and strategize, Marsco continues to consolidate its power, moving against the Luddite factions who conspired to rebel against the tech giant. The corporation may have grown too big to fail-but if it should collapse, anarchy and political bedlam will return once again.

The second entry in The Marsco Saga, Marsco Triumphant continues to explore James A. Zarzana's political and economic dystopia.

James A. Zarzana holds a BA in English from Saint Mary's College of California and an MA in English from Sacramento State University. He earned his PhD at the University of Notre Dame, specializing in the British novel. Zarzana is a professor emeritus and former department chair of Southwest Minnesota State University's English department, which he joined in 1989. He is the 2014 recipient of the prestigious Cathy Cowan Award for teaching and service to the university and the surrounding community of Marshall, Minnesota. Most of Zarzana's work is speculative fiction, but he is currently working on a comedic novel set in academia. In addition to The Marsco Saga, Zarzana is also working on a science fiction series focusing on mutinous factions within an interstellar empire. Married to professor and poet Marianne Murphy Zarzana, they have one daughter, Elaine, who has graduated from both Notre Dame and SMSU.
or
Buy Here
Copyright © 2020 American Booksellers Association