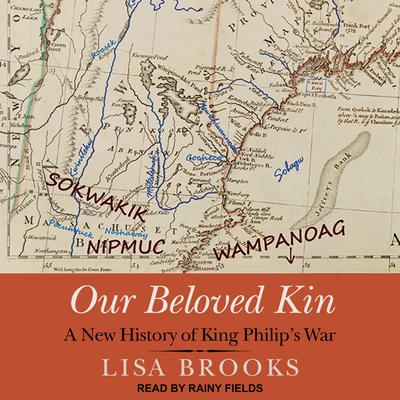 With rigorous original scholarship and creative narration, Lisa Brooks recovers a complex picture of war, captivity, and Native resistance during the "First Indian War" (later named King Philip's War) by relaying the stories of Weetamoo, a female Wampanoag leader, and James Printer, a Nipmuc scholar, whose stories converge in the captivity of Mary Rowlandson. Through both a narrow focus on Weetamoo, Printer, and their network of relations, and a far broader scope that includes vast Indigenous geographies, Brooks leads us to a new understanding of the history of colonial New England and of American origins. Brooks's pathbreaking scholarship is grounded not just in extensive archival research but also in the land and communities of Native New England, reading the actions of actors during the seventeenth century alongside an analysis of the landscape and interpretations informed by tribal history.

Rainy Fields was born in Claremore, Oklahoma. Fields is a registered member of the Muskogee Creek Nation and is of Cherokee descent. She spent most of her childhood in a small town in Illinois. Around the age of eleven her family moved to Albuquerque, New Mexico. She slipped a disc the summer before starting college. Which lead to a MED (Micro-endoscopic discetomy) during her freshman finals week. Life came to a stand-still. Her type-A personality had to take a back seat and she slowly learned to stop and smell the roses.

The need to boast her GPA after having surgery, led her to taking an acting class at the University of New Mexico. She fell in love with acting and later graduated with a BA in theater, with an emphasis in acting. Upon completion of UNM, Fields moved to Los Angeles, California.

Rainy enjoys spending her time taking improv classes at UCB. She is a member of the all-Native Improv Troupe, The Mayflower Welcoming Committee. Rainy is an ensemble member of Native Voices at the Autry, the country's only Equity theater company dedicated to creating and developing new works by Native playwrights. She also cohosts the podcast Hollywood Ndnz, which explores what it's like to be Native and in the entertainment industry.