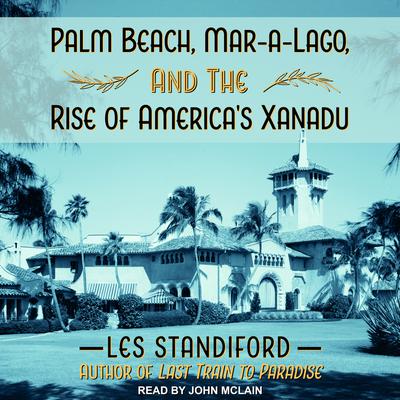 Looking at the island of Palm Beach today, with its unmatched mansions, tony shops, and pristine beaches, one is hard pressed to visualize the dense tangle of Palmetto brush and mangroves that it was when visionary entrepreneur and railroad tycoon Henry Flagler first arrived there in April 1893. Trusting his remarkable instincts, within less than a year he had built the Royal Poinciana Hotel, and two years later what was to become the legendary Breakers—instantly establishing the island as the preferred destination for those who could afford it. Over the next 125 years, Palm Beach has become synonymous with exclusivity—especially its most famous residence, "Mar-a-Lago." As Les Standiford relates, "the high walls of Mar-a-Lago and other manses like it were seemingly designed to contain scandal within as much as keep intruders out."

With the authority and narrative prose style that has gained Standiford's work widespread acclaim, Palm Beach, Mar-a-Lago, and the Rise of America's Xanadu tells the history of this fabled landscape intertwined with the colorful lives of its famous protagonists.

John McLain is an AudioFile Earphones Award-winning narrator who has recorded over 140 audiobook titles, from thrillers to nonfiction, westerns to mysteries, and more. John was nominated for an Audie Award in 2012 for his narration of the historical fiction novel The Resurrection of Nat Turner, Part 1: The Witnesses by Sharon Ewell Foster. An accomplished actor and musician, he has also appeared on the musical theater stage in Dallas and Phoenix.