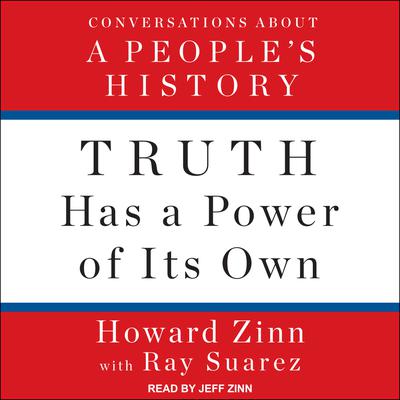 Truth Has a Power of Its Own (Digital Audiobook)

Conversations About A People’s History

Truth Has a Power of Its Own is an engrossing collection of never-before-published conversations with Howard Zinn, conducted by the distinguished broadcast journalist Ray Suarez in 2007, that covers the course of American history from Columbus to the War on Terror from the perspective of ordinary people—including slaves, workers, immigrants, women, and Native Americans.

Viewed through the lens of Zinn's own life as a soldier, historian, and activist and using his paradigm-shifting People's History of the United States as a point of departure, these conversations explore the American Revolution, the Civil War, the labor battles of the nineteenth and twentieth centuries, US imperialism from the Indian Wars to the War on Terrorism, World Wars I and II, the Cold War, and the fight for equality and immigrant rights, all from an unapologetically radical standpoint. Longtime admirers and a new generation of readers alike will be fascinated to learn about Zinn's thought processes, rationale, motivations, and approach to his now-iconic historical work.

Suarez's probing questions and Zinn's humane (and often humorous) voice—along with his keen moral vision—shine through every one of these lively and thought-provoking conversations, showing that Zinn's work is as relevant as ever.

Howard Zinn (1922-2010) was a historian, playwright, and activist. He wrote the classic A People's History of the United States. The book, which has sold more than two million copies, has been featured on The Sopranos and Simpsons, and in the film Good Will Hunting. In 2009, the History Channel aired The People Speak, an acclaimed documentary co-directed by Zinn, based on A People's History and a companion volume, Voices of a People's History of the United States.
Zinn grew up in Brooklyn in a working-class, immigrant household. At 18 he became a shipyard worker and then flew bomber missions during World War II. These experiences helped shape his opposition to war and passion for history. After attending college under the GI Bill and earning a PhD in history from Columbia, he taught at Spelman, where he became active in the civil rights movement. After being fired by Spelman for his support for student protesters, Zinn became a professor of political science at Boston University, were he taught until his retirement in 1988.