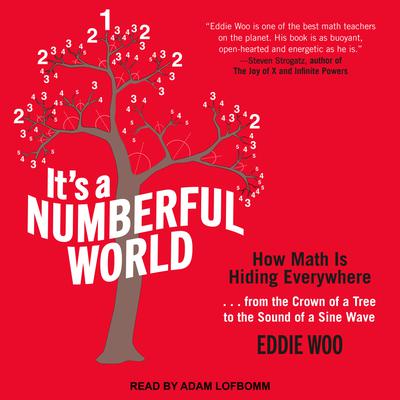 It's a Numberful World (Digital Audiobook)

How Math Is Hiding Everywhere

Why aren't left-handers extinct? What makes a rainbow round? How is a pancreas . . . like a pendulum?

These may not look like math questions, but they are—because they all have to do with patterns. And mathematics, at
heart, is the study of patterns.

That realization changed Eddie Woo's life—by turning the "dry" subject he dreaded in high school into a boundless quest for discovery. Now an award-winning math teacher, Woo sees patterns everywhere: in the "branches" of blood vessels and lightning, in the growth of a savings account and a sunflower, even in his morning cup of tea!

Here are twenty-six bite-size chapters on the hidden mathematical marvels that encrypt our email, enchant our senses, and even keep us alive—from the sine waves we hear as "music" to the mysterious golden ratio.

This book will change your mind about what math can be. We are all born mathematicians—and It's a Numberful World.

Ever since Adam Lofbomm pressed "Record" on his Fisher-Price recorder back in 1984, he's been bringing worlds to life in words. Over the years, his passion for language inspired him to read broadly, write extensively, speak publicly, perform on-stage and on-camera, but when he stepped into the vocal booth for his first narration job in Seoul, Korea, back in 2006, all those many pieces just clicked into place. He realized then and there that voice acting was what he was made to do.
Over the last eleven years working as a professional voice-over actor, Adam has had the great fortune to collaborate with some of the best publishers and organizations in the world. Whether or not Malcolm Gladwell was right when he said that ten-thousand hours will make you world-class at something, Adam did stop counting after he surpassed that milestone in 2016.